The outgoing Pakistan Muslim League-Nawaz government has accused the military and courts of conspiring against Nawaz Sharif to help Imran Khan's PTI. 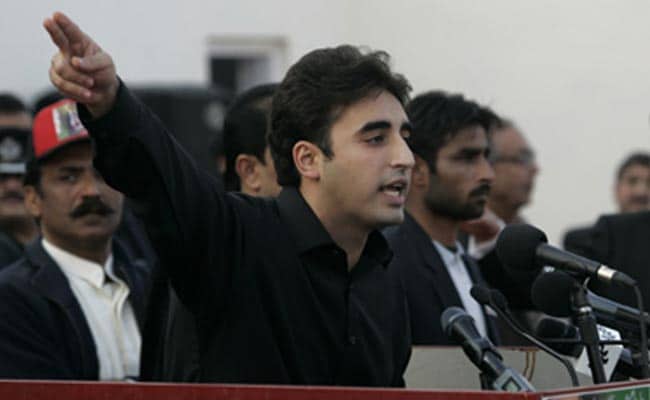 Bilawal was still in university when his mother, Benazir Bhutto, was assasinated

His mother was assassinated on the campaign trail and his grandfather was executed by a military dictator, but that has not prevented Bilawal Bhutto Zardari from seeking the job they both held: prime minister of Pakistan.

Oxford-educated and single, 29-year-old Bhutto Zardari is campaigning himself for the first time, traversing the sprawling plains of his native Sindh province to try to revive the fortunes of his struggling, left-of-centre Pakistan Peoples Party (PPP) ahead of a July 25 general election.

He was still in university when his mother, two-time prime minister Benazir Bhutto, was assassinated in 2007 as she campaigned to restore democracy after military rule. Her father, Zulfikar Ali Bhutto, also a prime minister, was hanged after being deposed in a military coup.

Asked if he is ever afraid while campaigning, he answered briefly: "No". He then pivoted to discussing a "climate of fear" in the lead-up to the elections that some activists blame on Pakistan's powerful military.

In one of the first interviews since being named the PPP's prime ministerial candidate, he also criticised fellow Oxford graduate and opposition leader Imran Khan - a potential coalition partner.

Flanked by supporters on either side of the single-lane highway, Bhutto Zardari was showered with rose petals as he waved to thousands of people who waited to catch a glimpse of the youngest of the political dynasty that many call the Pakistani equivalent of the Kennedys.

Despite the feel-good feeling in the crowds, election time is always tense in Pakistan, which has been ruled by the military for almost half of the 70 years since independence.

Mr Khan, a former cricket captain of Pakistan, denies the accusation and calls the PML-N a graft-ridden "mafia".

And overshadowing all this is the fear that the election is being engineered by the "establishment", a euphemism for Pakistan's much feared military and intelligence top brass, along with some senior civil servants and judges.

The military has repeatedly denied that it interferes in modern-day politics.

"I think that there is absolutely a history in Pakistan of an over-active role for our establishment and the Pakistan Peoples Party firmly believes that should not be the case," Bhutto Zardari said, when asked about the military's involvement in politics.

Bhutto Zardari's convoy started in the town of Thatta, the medieval capital of Sindh, and was later headed north to the Punjab and Khyber Pakhtunkhwa provinces, hoping to revive the vote base it lost in the 2013 polls, when it finished second.

A Gallup nationwide poll in March put his party's popularity at 17 percent, with Mr Khan's PTI at 24 percent and Sharif's PML-N at 36 percent.

One of the party's challenges is overcoming the image of Bhutto Zardari's father, former President Asif Ali Zardari. Some analysts and party insiders say numerous corruption allegations against Zardari could cost the party at the polls, where it will contrast with Imran Khan's relentless anti-graft message.

Mr Zardari spent 11 years in jail on charges of corruption and murder, but was never convicted. He has always maintained his innocence and remains a party leader and adviser to his son.

Although Bhutto Zardari is campaigning to become prime minister, many political analysts believe the PPP may at best become a power broker if no party wins a clear majority, as seems likely.

He has indicated he would be willing to join a possible coalition government, although he did not say whether he would prefer the PML-N or Khan's PTI.

"It may win Imran Khan an election but it has disastrous consequences for the youth of Pakistan and for Pakistan's society," Bhutto Zardari said.

He has been quoted in local media as calling the PML-N "cruel rulers" and saying that it had "decided to eliminate the poor, and not poverty."

Bhutto Zardari said his ambitions were not just about becoming prime minister, but bringing back the policies that were dear to his mother.

On the campaign trail, he frequently mentions her in his speeches.

"We have to keep B.B.'s promise. We have to save Pakistan," he says in Urdu, the national language, using the initials by which his mother was commonly known.

"There is no greater sense of fulfilment in a son's life than to feel like he is continuing with his mother's incomplete missions," he said.