Did Pakistani Security Agents Kidnap Bloggers To Make A Point? 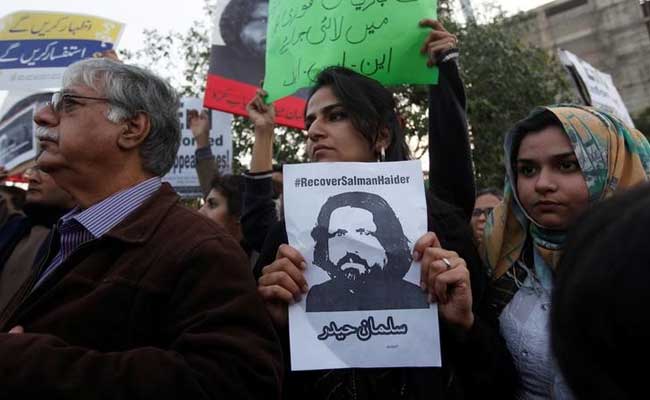 Human rights activists hold a picture of Salman Haider, who is missing, during a protest.

ISLAMABAD: In the space of a few days last month, five Pakistani bloggers - all known as left-leaning social-media activists - were abducted and vanished into unknown hands. After a domestic and international outcry, the missing men suddenly reappeared this month - safe and unharmed, but just as mysteriously.

In some ways, they are still missing.

None have spoken about their capture or treatment, widely said to be the work of Pakistani security agents; one of them, now in the Netherlands, said Thursday that he had been "afraid I would never come back" but did not identify his abductors. None appear to have posted anything online, and one website linked to them has now been reactivated with a tape of serene music and a voice that accuses "secular liberals" of using the internet to harm Islam and "ridicule the Koran."

While public furor has died down with the return of the men, the case continues to raise disturbing questions about the unchallenged role of state security agencies - which operate in the shadows, free of civilian oversight - in tracking and quashing new forms of dissent in the internet era. Rights groups say a total of 11 bloggers have gone missing in recent weeks, but only five cases have been publicly reported.

Pakistan's intelligence agencies have long been accused of using "enforced disappearances" as a tool for warning or punishing dissidents. Since 2011 alone, the Human Rights Commission of Pakistan reports, more than 3,500 such disappearances have occurred. As the agencies confront the new challenge of electronic opposition, critics allege, they are combining sophisticated detection tools with more familiar, cruder methods of retaliation.

"The kidnappings were designed to eliminate the tiny sliver of cyberspace that activists currently have," Pervez Hoodbhoy, an outspoken Pakistani physicist and dissident, wrote in a recent essay. He said the complex process of tracing the blogs and their authors "suggested the involvement of some secret state agency," and that "only the authorities" possessed the "specialized cyber tools" to identify anonymous internet posters.

Along with other recent incidents, the abductions have also spurred a national debate about where and how to draw the line between free speech and hate speech in a society that is deeply divided by ideology and religion, and where extremists on both sides can utilize the protective cloaking of internet sites as well as the public free-for-all of cable TV to spew inflammatory accusations.

Finally, these cases have highlighted how unfounded charges of blasphemy - a highly emotional issue among Pakistan's 95 percent Muslim populace - have become a dangerous factor in the war between secular liberals and Islamist and nationalist conservatives that has exploded on the internet and TV. Any statement or action seen as an insult to Islam or the prophet Muhammad is a capital crime here, and mere accusations can lead to vigilante or mob violence.

"We are seeing the most vicious and provocative hate speech on some television talk shows," Imtiaz Alam, a veteran journalist and a recent target of such attacks, wrote in a newspaper column Thursday. "Allegations of blasphemy, immorality and un-patriotism are being leveled to incite violence and endanger the lives of many media persons, including this scribe."

In the case of the kidnapped bloggers, the true authorship of their allegedly provocative postings and the identity of their abductors remain murky. A Google search for the best-known blogger - poet and college lecturer Salman Haider - led to pages showing anonymous references to the prophet "marrying a six-year-old girl" and a declaration that "this bloody religion Islam should go to hell." There was no way to know who had actually posted the language.

While many Pakistanis would regard such comments as offensive, there was immediate and widespread public outrage over the abductions and concern that the bloggers would meet the same fate as many Pakistanis subjected to "enforced disappearances" in past years, who have never been seen again. Civic rights groups protested across the country, and the U.S. and British governments expressed concern.

"To the casual eye, our press would seem to be very free," said Farhatullah Babar, a senator in his 70s who has long pressed for laws to bring security agencies under public legal purview. "There are voices of sanity being raised, but there is also fear and self-censorship. When it comes to what the state sees as going against national security or religion, there is no freedom of expression."

Pakistani officials denied having any knowledge of the kidnappings. Interior Minister Chaudhry Nisar, assured parliament last month that it was "not the policy of this government" to take such actions. He said he was personally leading an investigation and that "all-out" efforts would be made to recover the men, including by making inquiries with the intelligence agencies.

Several days later, the chief military spokesman told a news conference that "the army has nothing to do with the disappearance of the bloggers." He added that Nisar's comment about consulting with intelligence agencies was "not meant to implicate someone." An intelligence official said in an interview that his agency had no connection with the abductions.

Meanwhile, a media campaign was launched to discredit the missing men, mostly by conservative clerics and TV hosts. One TV commentator said their blogs were intended to "create chaos in our society" and were "tantamount to blasphemy." A turbaned cleric gave an online sermon saying that whoever kidnapped the bloggers would be "blessed by God" and that they were lower than pigs and dogs.

A similar campaign was mounted against some of Pakistan's leading journalists and liberal critics, most affiliated with Geo television and its owner, the Jang media company. According to one of them, TV anchor Najam Sethi, charges of blasphemy and sedition were filed against him and others at Geo last week by unknown people at police stations in several different provinces.

Sethi filed complaints with Pakistani rights groups and the international Committee to Protect Journalists, alleging that he was being pilloried in a "life-threatening campaign" by certain TV figures, especially Aamir Liaqat Hussain. Sethi said the diatribes were partly due to longtime media rivalries but were focused on his recent criticisms of the army, corruption and the blogger case on his Urdu-language news show.

"These are virulent attacks calling me anti-Pakistan, anti-military and anti-Islam. . . . I fear for my safety," Sethi said in a phone interview this week from Dubai, where he said he plans to remain for some time. Excerpts from Liaqat's TV monologues, translated and published Thursday in a Jang-owned newspaper, lambasted Sethi and other journalists as "traitors" who hate the army and mock the Koran.

In a small but important victory for efforts to curb the rising tide of hate speech, Pakistan's Supreme Court this week ordered Liaqat's show to be taken off the air, upholding an earlier ruling by the Pakistan Electronic Media Regulatory Authority. The regulatory panel found that Liaqat repeatedly made "baseless" charges that certain journalists and activists were "anti-state" and "anti-Islam" and that this was an "incitement to violence."

In the newer and more shadowy realm of online and social media, however, the government's attempts at a legal crackdown have been mostly aimed at countering terrorism. Last year, Parliament passed a law against cybercrime that imposed a seven-year prison term for "glorification of an offense related to terrorism." But there has been no similar attempt to define or punish hate speech.

As for the recent abductions, it seems unlikely that the culprits will ever be identified, much less charged with a crime. Even though the bloggers have been freed, moreover, rights activists here say the case has already had a chilling effect on the community of liberal online activists who have now gotten a clear warning not to go too far.

Ahmad Waqas Goraya, 34, the released blogger now in the Netherlands, said Thursday that "hundreds of our friends" have now deactivated their social media accounts and websites. In a telephone interview with Agence France-Presse, he insisted that in his prior postings, "nothing was against Pakistan, nothing was against Islam. I was critical of policies because I wanted to see a better Pakistan."