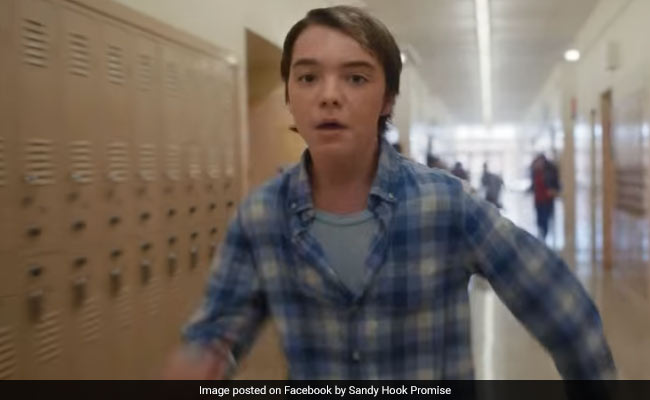 The PSA begins with kids showing off their new backpacks and binders, but the tone changes quickly.

An association formed by victims' relatives after the 2012 massacre at Sandy Hook school in the United States has posted a shocking ad featuring children fleeing at the sound of gunfire.

"Back-To-School Essentials," produced by the Sandy Hook Promise association and posted online, begins as a classic spot with kids showing off their new backpacks, binders, and headphones.

But the tone quickly changes when a boy is seen running down a school corridor, touting his new sneakers as shots are heard in the background.

Next, a girl using her new jacket to tie closed her classroom doors, and a boy smashes his new skateboard through a window to escape.

"These scissors will really come in handy in our class," says another girl, standing guard at a door with scissors in hand.

A girl strips off her knee socks and uses them as a tourniquet on a classmate's bloodied legs.

Another girl huddled in a dark bathroom corner taps out "I love you Mom" on her cellphone and stifles her sobs at the sound of approaching footsteps.

Then a message comes on the screen: "It's back to school time and you know what that means."

"School shootings are preventable when you know the signs."

(Please note that this PSA contains graphic content related to school shootings that may be upsetting to some viewers.)

Sandy Hook Promise was founded by relatives of victims of the mass shooting at Sandy Hook elementary school in Newtown, Connecticut on December 14, 2012, in which a gunman killed 26 people, including 20 children.

It has campaigned against gun violence, working with lawmakers to toughen gun control laws and on programs aimed at intervening to stop at troubled youths before they act.

But despite multiple mass shootings since Sandy Hook, efforts to restrict gun ownership have largely failed.

A series of measures are currently before Congress, notably to close loopholes in background checks aimed at preventing gun sales to people with criminal records or psychiatric history.

(Except for the headline, this story has not been edited by NDTV staff and is published from a syndicated feed.)
Comments
sandy hook promiseUS mass shootingsGun Violence