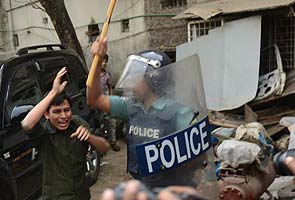 Dhaka: Bangladesh police fired tear gas and rubber bullets on Friday in fierce clashes with Islamists demanding the execution of bloggers they accused of blasphemy, killing one person and injuring around 100.

Parts of central Dhaka turned into a battlefield as protesters attacked police with bricks and sticks in front of the national mosque.

The security forces responded with hundreds of rounds of rubber bullets and tear gas shells, according to witnesses.

The country's 12 Islamic parties called the protests after the weekly prayers in nearly half a million mosques nationwide, demanding the execution of bloggers they say were behind blasphemous writings against Islam and Prophet Mohammed.

One person was killed during the clashes in western district of Jhenidah, district police chief Altaf Hossain told AFP, adding that hundreds of protesters also clashed with ruling party activists.

"The person, most probably a supporter of an Islamic party, died on the way to hospital," he said.

Fierce clashes also occurred in the port city of Chittagong, the northern city of Bogra and dozens of other cities and towns where police fired rubber bullets at thousands of protesters, leaving scores injured, police and local media said.

In Dhaka violence broke out outside the Baitul Mukarram national mosque, where the protesters also attacked around a dozen journalists.

Police tried to thwart the protest by locking the gates of the mosque where thousands of people were performing their weekly Jumma prayers, an AFP photographer at the scene said.

Sayeed Khan, an emergency doctor at Dhaka medical college hospital, told AFP that up to 50 people had been admitted, most injured by rubber bullets.

Promoted
Listen to the latest songs, only on JioSaavn.com
Tensions have risen in the Muslim-majority nation over the alleged anti-Islamic blog posts by Ahmed Rajib Haider, who was hacked to death last week near his home in the capital Dhaka.

Since Haider's death, Bangladeshi social media has been flooded with his alleged blog posts and those by other bloggers mocking Islam, triggering protests by a number of Islamic groups and clerics.