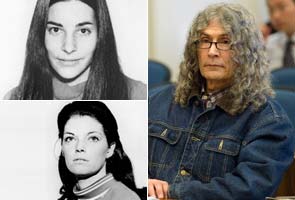 New York: One victim, Cornelia Michel Crilley, was a Trans World Airlines flight attendant who was raped and strangled in her Upper East Side apartment in 1971; the other, Ellen Jane Hover, an aspiring orchestra conductor who disappeared one summer day in 1977 -- and whose remains were found nearly a year later on the Rockefeller estate in Westchester County.

The two women, both 23 at the time of their deaths, most likely did not know each other. But according to law enforcement officials, they had at least one connection: both were killed by Rodney Alcala, a photographer and one-time contestant on "The Dating Game" who is on death row in California for killing a 12-year-old girl and four women in the late 1970s. He has been in prison there since 1980.

A grand jury in Manhattan has indicted Mr. Alcala, 67, on charges that he murdered Ms. Crilley and Ms. Hover, according to a law enforcement official familiar with the case. The Manhattan district attorney's office would not comment on the indictment. Mr. Alcala may also have been involved in other killings, officials say.

One of Ms. Hover's relatives said she was gratified at the expected indictment.

"For the longest time, it was a foregone conclusion that he would never be charged for her murder," said Sheila Weller, a cousin of Ms. Hover. "This is a terrific surprise."

But Leon Borstein, who was Ms. Crilley's boyfriend and said he was with the police when they discovered her body in her apartment, said he did not see the point of prosecuting a serial killer already on death row.

"All it does is entertain him, and it doesn't do anything for us," Mr. Borstein said. "He gets to fly out to New York, meet with his lawyers, sit in a courtroom for days on end. It certainly alleviates the boredom of sitting in a jail cell."

For more than three decades, the killings of Ms. Crilley and Ms. Hover remained unsolved. It is unclear when detectives in New York became interested in Mr. Alcala -- who lived in New York in the early 1970s, attended New York University under an alias and worked as a photographer -- as a possible suspect. Law enforcement officials would not say. But a former boyfriend of Ms. Hover's said in an interview that the police told him two weeks after her 1977 disappearance that a man with California connections might be involved.

In 2003, New York police detectives investigating the Crilley murder went to California with a warrant to interview Mr. Alcala and get a dental impression from him, said Paul J. Browne, the department's chief spokesman. Mr. Alcala, who was in prison for the murders in California, initially denied that he had ever visited New York. But after the police presented him with the warrant, he responded, "What took you so long?" Mr. Browne said.

A forensic dentist later issued an opinion that a bite mark on Ms. Crilley's body was consistent with Mr. Alcala's impression, a law enforcement official said.

While investigating Ms. Crilley's murder, detectives with the Police Department's Cold Case Squad learned that Mr. Alcala had used an alias, John Berger, when he was living in New York, Mr. Browne said. They later found that name in the file folder for Ms. Hover's case, he said.

Ms. Weller said her cousin had an appointment with the man to take pictures before she disappeared.

Last year, the Manhattan district attorney, Cyrus R. Vance Jr., opened a cold case unit to review thousands of unsolved murders, and the cases of Ms. Crilley and Ms. Hover were among those the office reviewed. The district attorney's office would not discuss its role in the investigation, but, speaking generally, Mr. Vance said in a statement, "Cold cases are not forgotten cases."

Later in 2010, after the police released dozens of photographs of young women that were found in a storage locker that Mr. Alcala kept in Seattle in 1979 to see if there were other victims, several women came forward claiming that a photographer named John Berger had taken their picture in New York in the 1970s.

The trove also included items from the victims in the California cases, who were killed from 1977 to 1979. They were all sexually assaulted and strangled or beaten to death. Their cases were solved largely with DNA evidence, and, after a lengthy legal process in which murder convictions against Mr. Alcala were overturned twice, he was convicted there on a retrial in February 2010. Prosecutors presented evidence that Mr. Alcala would approach young women and ask to take their picture as a way to lure them.

Mr. Alcala's violent offenses date back more than four decades, the authorities said. In 1968, he kidnapped, beat and molested an 8-year-old girl in Los Angeles County, and was on the Federal Bureau of Investigation's most-wanted list, the authorities said. He became a camp counsellor in New Hampshire but was arrested after someone noticed his picture on a flier at the post office. He was turned over to the police in Los Angeles, and was convicted in 1972. He was paroled after 34 months.

When not incarcerated, Mr. Alcala, whom the authorities have described as highly intelligent, assumed the life of a freewheeling bachelor. In 1978, he was "Bachelor No. 1" on an episode of "The Dating Game," and the host described him as "a successful photographer who got his start when his father found him in the darkroom at the age of 13, fully developed," according to a YouTube video of the show. "Between takes, you might find him sky-diving or motorcycling."

Wearing a brown bell-bottom suit and a shirt with a butterfly collar, the long-haired Mr. Alcala won the contest, charming the bachelorette with sexual innuendo. The woman later decided not to go on the date with him because she found him disturbing, according to several news reports.

Mr. Borstein, Ms. Crilley's boyfriend, said she was "funny and full of life," with long brown hair and an infectious smile. The details of her murder are still fresh in his memory. He was working as a Brooklyn homicide prosecutor at the time, and he spent most nights with the police interviewing witnesses for his cases.

When Ms. Crilley's mother called to tell him her daughter was missing, he went with the police to her apartment. "They found her dead body inside," he said. "They asked if I would identify the body, and I said no. I didn't want to see her like that."

He said he did not know why the investigation had stalled for so many years; as Ms. Crilley's boyfriend, he said, he became a suspect, and his friends in the Police Department did not share information with him.

Ms. Hover's disappearance drew the attention of the national press, in part because her father, once a Hollywood nightclub owner, rubbed elbows with celebrities. Her godfathers were Sammy Davis Jr. and Dean Martin. Her mother and stepfather hired a private detective to work on the case.

Bruce Ditnes, who had dated Ms. Hover, recalled hanging up posters with her picture near her Midtown apartment in 101-degree weather after she was reported missing. He said she had long black hair down to her waist and "gorgeous brown eyes." He said he was not surprised that she had caught Mr. Alcala's eye.

"Ellen would literally cause traffic accidents," he said. "We would walk into restaurants, and people would spill things on themselves."
Comments
Serial KillerThe Dating GameSerial killings in US