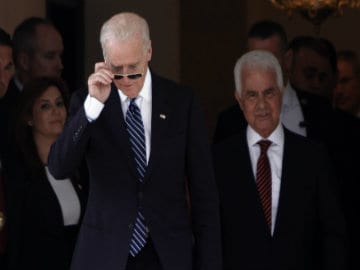 "Cyprus is poised to become a key player ... transforming the eastern Mediterranean into a new global hub for natural gas," Biden said as he toasted his host, Cyprus President Nicos Anastasiades, at lunch in the presidential palace.

Anastasiades said the gas deposits, which also have been found in Israeli waters, can offer "an alternative energy corridor leading to increased energy security."

The West wants to develop alternative suppliers of natural gas for Europe. Russia, the current top supplier, has threatened it could cut supplies or raise prices to European customers as part of diplomatic rifts over Ukraine.

Biden pledged U.S. government support for efforts to reunify the island. In 1974, Turkey invaded after a coup by supporters of union with Greece. For the past four decades the island has remained divided into a breakaway Turkish Cypriot north and an internationally recognized Greek Cypriot south.

Turkey, which doesn't recognize Cyprus' sovereignty, has voiced strong opposition to Greek Cypriot claims to the natural gas fields. It has repeatedly sent warship-escorted research vessels into Cypriot waters, where oil and gas companies are currently surveying, to underscore their own claim.

Only Turkey recognizes a 1983 Turkish Cypriot declaration of independence and maintains 35,000 troops in the north.

Turkish Cypriot leader Dervis Eroglu, who met separately with Biden, said afterward that Turkish Cypriots are entitled to the potential mineral bounty and asserted that "the world accepts that."

Anastasiades said he had "no doubt" that strong U.S. support would help secure Cyprus' rights to exploit its natural resources over Turkish objections.

Biden intends to discuss the natural-gas tensions with both men together over dinner later Thursday.

Promoted
Listen to the latest songs, only on JioSaavn.com
Analysts say Israel, which already has developed natural gas fields in its waters, may want to utilize Cyprus as a terminus for future pipelines as its own industry expands in the eastern Mediterranean.