Crying Girl On Time Cover Not Separated From Her Mother, Father Says

Time released its July 2 cover using the girl's image, in a photo illustration portraying her looking up at President Trump towering above her. 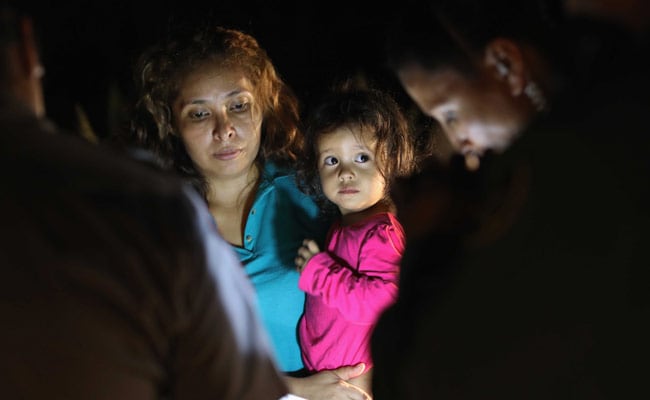 The photo of the little girl crying as a US Border Patrol agent patted down her mother became a symbol of the families pulled apart by the Trump administration's "zero tolerance" policy at the border, even landing on the cover of Time Magazine. But the father of the girl confirmed to The Washington Post Thursday night that the child and mother were not separated.

The heart-wrenching image, captured by award-winning Getty Images photographer John Moore, was spread across the front pages of international newspapers. It was used to promote a fundraiser that has collected more than $18 million to help reunite separated families.

Time on Thursdayreleased its July 2 cover using the girl's image, without the mother, in a photo illustration portraying her looking up at President Trump towering above her.

At first, not much was known about the mother and daughter or what happened to them. Many speculated that the girl may have been ultimately separated from her mother, like the more than 2,300 migrant children split from their parents since May 5. 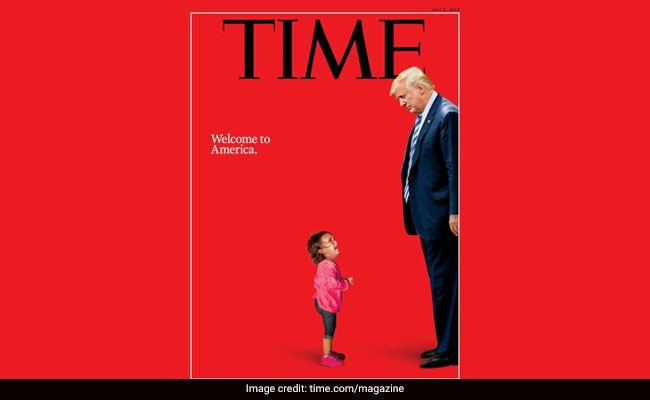 Donald Trump has again appeared in the cover of American weekly TIME over his policies.

In Honduras, Denis Javier Varela Hernandez recognized his daughter in the photo and also feared she was separated from her mother, he told The Post.

But he learned this week that his wife and daughter were not, in fact, separated. The mother, 32-year-old Sandra Sanchez, was detained with her nearly 2-year-old daughter, Yanela, at a facility in McAllen Texas, Varela said.

Honduran deputy foreign minister Nelly Jerez confirmed Valera's account to Reuters. A spokesman for U.S. Customs and Border Protection also confirmed to the Daily Beast that the mother and daughter were not separated. Honduran and federal officials could not immediately be reached for comment by The Post.

Immigration and Customs Enforcement released a statement to BuzzFeed on Thursday confirming that Sanchez was arrested by U.S. Border Patrol near Hidalgo, Texas, on June 12 while traveling with a family member. She was transferred to ICE custody on June 17, and is being housed at the South Texas Family Residential Center in Dilley, Texas, the statement read.

ICE said Sanchez was previously deported to Honduras in July 2013.

Sanchez and her daughter left to the U.S. from Puerto Cortes, north of the Honduran capital of Tegucigalpa, on June 3, Valera said. Sanchez had told her husband that she hoped to go the U.S. to seek a better life for her children, away from the dangers of their home country. But she left without telling him that she was taking their youngest daughter with her. Valera, who has three other children with Sanchez, feared for the little girl's safety, he said. Yanela is turning 2 years old at the beginning of July.

After Sanchez left, Valera had no way to contact her or learn of her whereabouts. Then, on the news, he saw the photo of the girl in the pink jacket.

"The first second I saw it, I knew it was my daughter," Valera told The Post. "Immediately I recognized her."

He heard that U.S. officials were separating families at the border, before Trump reversed the policy on Wednesday. Valera felt helpless and distressed "imagining my daughter in that situation," he said.

Moore, the photographer who captured the photograph, told The Post's Avi Selk that he ran into the mother and toddler in McAllen on Tuesday night. He knew only that they were from Honduras and had been on the road for about a month, he said. "I can only imagine what dangers she'd passed through, alone with the girl."

Moore photographed the girl crying as the border agent patted down the mother. But then, Moore told The Post, the woman picked up her daughter, they walked into the van, and the van drove away. Moore didn't know what happened to the family, but based on the new federal policies, he speculated that she would be taken from her mother when the van reached its destination.

"I don't know what the truth is," Moore said. "I fear they were split up."

A Time story recounting the photographer's experience initially stated the girl was carried away screaming by border agents, and later corrected the article to say that was incorrect and that the two were actually taken away together.

Earlier this week, Valera received a phone call from an official with the Honduran foreign ministry, letting him know his wife and daughter were detained together. While he doesn't know anything about the conditions of the facility, or what is next for Sanchez and Yalena, he was relieved to hear they were in the same place.

As news emerged Thursday that the mother and child were not actually separated, conservative media jumped on the story, portraying it as evidence of "fake news" surrounding the Trump administration's immigration policies.

It was the most prominent story on the homepage of the conservative news outlet, Breitbart, which called it a "fake news photo." Donald Trump Jr. retweeted the story on Thursday night.

Valera pushed back against the portrayal's of his daughter's story, saying it should not cast doubt on the "human rights violations" taking place at the border.

"This is the case for my daughter, but it is not the case for 2,000 children that were separated from their parents," Valera said.

Valera said he felt "proud" that his daughter has "represented the subject of immigration" and helped propel changes in policy. But he asked that Trump "put his hand on his heart."

He hopes that U.S. officials will grant asylum to his wife and daughter, he said.

Asked if he would also like to come to the U.S., he said, "of course, someday."