Eleven gang members have been charged and some may face the death penalty. 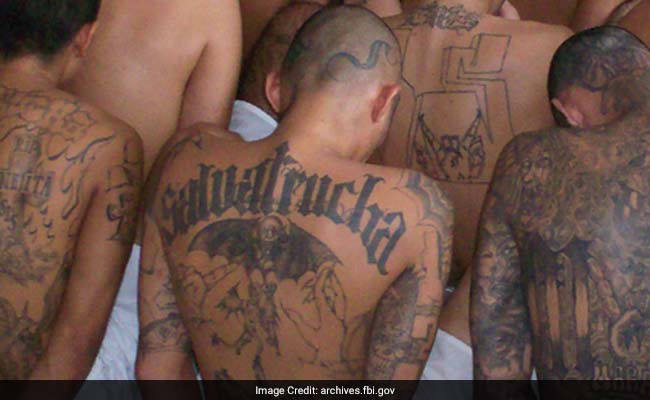 All the men are charged with conspiracy to commit kidnapping. (File)

WASHINGTON: The Facebook image showed a man dressed in black and wearing a mask, with three 6s around his head.

When a member of MS-13 saw it, federal prosecutors said in an indictment unsealed Friday, it set off a chain reaction that left two teenage boys dead. Their remains were found last spring in the woods of Virginia's Holmes Run Stream Valley Park in Fairfax County.

Nine accused of involvement in the murders are in federal custody, Assistant U.S. Attorney Alexander Blanchard said in court Friday. One is in custody in Fairfax County. An eleventh suspect is believed to have fled the country.

All the men are charged with conspiracy to commit kidnapping. But Blanchard said during a brief hearing in federal court in Alexandria that prosecutors plan to seek additional charges against the defendants, some of which carry the possibility of the death penalty.

The photograph came from the Facebook profile of Edvin Mendez, 17, of Falls Church, Virginia. It led MS-13 members to believe Mendez was a member of the rival 18th Street Gang, according to court records, and they concluded he was plotting to infiltrate and spy on them.

So in late August of 2016, prosecutors said, an MS-13 member lured Mendez to the park under the pretense of a gang meeting. There, according to the indictment, a group of gang members murdered him and buried his body.

Mendez's family spent the next month searching for the missing teen. His brother reached out to an acquaintance on Facebook looking for help, according to a search warrant.

Sergio Triminio, 14, agreed to meet. An associate of MS-13, according to the search warrant, he was able to offer the harsh truth: Mendez's brother had been murdered.

According to the indictment, Sergio soon met with a similar fate. He was lured to the same park via Facebook Messenger under pretense of a gang meeting, authorities said. He too was murdered, and his body was buried in the woods.

Two of the suspected killers removed Sergio as a Facebook friend the next day, according to the indictment.

At the time, Sergio was on probation and was wearing a court-ordered ankle bracelet, according to a search warrant. But after Sept. 26, 2016, the day he disappeared, the ankle bracelet's signal could not be detected.

Karla Triminio, Sergio's mother, did not return a call for comment Friday.

She previously said the grief has been unbearable for the family. She said her 3-year-old daughter keeps asking where her brother is.

"I tell her that he's in heaven," Triminio said. "But then she goes around looking for heaven, looking for him."

Mendez's family, which is from Guatemala, could not be located for comment.

The defendants range in age from 20 to 27 and are all natives of El Salvador. One of them, Oscar Contreras Aguilar, 20, is currently charged with conspiracy to commit gang murder. Prosecutors allege in the indictment that each of the 11 defendants was involved in at least one of the slayings. Their immigration status was not clear Friday.

Robert Jenkins represents Elmer Martinez, 27, nicknamed "Killer." He said prosecutors have not yet revealed evidence of Martinez's alleged involvement in the slayings but claim Martinez was the "first word," or clique leader, at the time of the murders.

"Even if that were true, that doesn't make him responsible," Jenkins said.

The MS-13 gang has been behind a spate of grisly violence in the Washington area and up and down the East Coast in recent years.

In the Washington area, members have been accused of high-profile crimes that include the videotaped killing of a 15-year-old girl in Fairfax County, Virginia, and the slaying of a man who was decapitated and had his heart removed in Montgomery County, Maryland.

Last year, Fairfax County police chief Edwin C. Roessler said the gang's activity was "getting out of control." Authorities across the region have put a renewed focus on the gang, which is the largest and most violent in the region.

Violence related to MS-13 has drawn the attention of President Donald Trump, who has cited it as a primary reason for his crackdown on illegal immigration.

Promoted
Listen to the latest songs, only on JioSaavn.com
Experts credit MS-13's resurgence to a fresh push by the gang, once on the decline, to reestablish its ranks in the United States. Members have found recruits among unaccompanied minors who fled the same gang violence in Central America only to become involved with it here.