"Struggling To Put Into Words": Fully Vaccinated EU, US Passengers Arrive In UK

Following the relaxation of strict rules on foreign travel to England, the flight, arriving at 6:20 am, was one of the first to touch down. 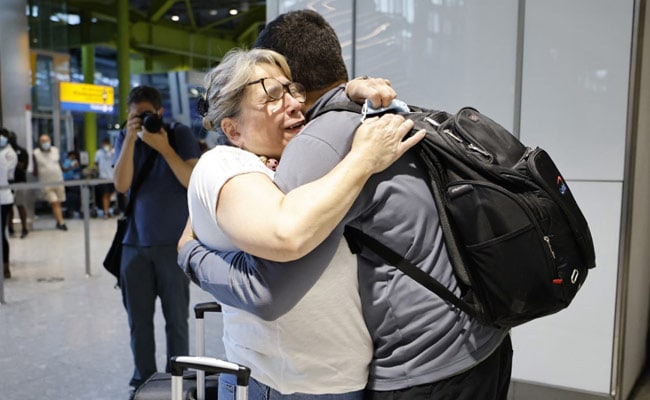 Relatives embrace as they arrive from US at Heathrow's Terminal 5 in West London.

After over a year of travel restrictions, the arrival of American Airlines flight LY8051 to London's Heathrow Airport on Monday from New York marked a step back to normality for families separated by the Atlantic and Covid.

"It's amazing," Reece Wilson, 31, told AFP as he was reunited with his family for the first time in 21 months at Heathrow's Terminal Five.

"It's one of those things that we take for granted and I am struggling to put into words," the British maritime worker based in New Orleans added, before his voice trailed off with emotion.

Following the relaxation of strict rules on foreign travel to England at 4:00 am, the flight, arriving at 6:20 am, was one of the first to touch down with fully vaccinated passengers allowed to avoid quarantine.

Before Reece passed through the double doors at arrivals with his Texan wife and two children, his parents Sharon and Ray Wilson, both 57, waited in expectation and relief with their other son and daughter.

"We just want to get back to normal as quickly as we can," Sharon Wilson said. "Sadly (Covid) has been awful for everybody."

The grandmother explained that over the nearly two years the family had been apart, she had kept in touch through video calls.

"Usually we go out there two or three times a year, especially since they got the children," she said.

"I am just so happy that we can all get together again and start travelling again," Sharon Wilson added as the couple explained the US had become like a "second home" to them before Covid.

As they were reunited, tears streamed down Sharon's face and Covid mask.

With an arm around his quietly sobbing younger sister, Reece said he was looking forward to a British sausage roll before going back to the family's home in Surrey, southeast England.

He added he was going to make sure he came back to the UK "every opportunity I can".

"You don't know when something's going to prevent you from doing that."

Ishak Mogul, a grandfather from Swindon, west of London, waited at the terminal for the arrival of his daughter Nabila, whom he hadn't seen for three years after the pandemic postponed an already overdue trip home.

His grandchildren, who waited with him, carried colourful signs welcoming their American cousins from Charlotte, North Carolina, to the UK.

"We haven't slept. I probably slept one hour last night. We've been kind of waiting for her, getting everything ready," he said.

He explained that the time apart had been fraught, with his daughter separated from the family for so long.

"She has been struggling quite a lot. She had been waiting for us to go and then we couldn't... it's been a lot of stress on them," Mogul said.

As Nabila and her children emerged from the baggage hall, they were swept up in an emotional family embrace.

Mogul said he was looking forward to putting the strain of recent months behind them.

"It's been a really exciting day for us. We are looking forward to a lovely week," he said.