The remote-controlled, four-legged machine built by Boston Dynamics was first deployed in a central park on Friday as part of a two-week trial that could see it join other robots policing Singapore's green spaces during a nationwide lockdown. 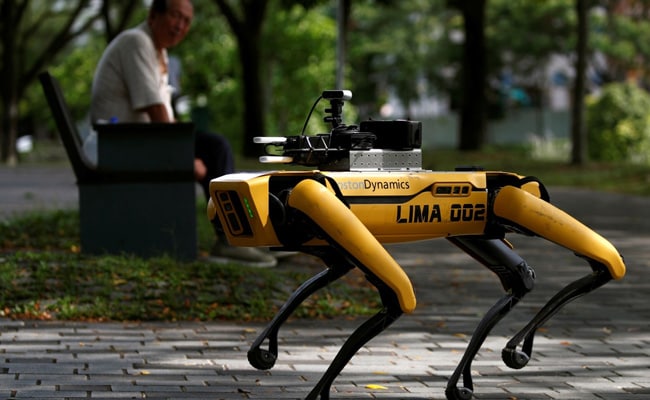 Far from barking its orders, a robot dog enlisted by Singapore authorities to help curb coronavirus infections in the city-state politely asks joggers and cyclists to stay apart.

The remote-controlled, four-legged machine built by Boston Dynamics was first deployed in a central park on Friday as part of a two-week trial that could see it join other robots policing Singapore's green spaces during a nationwide lockdown.

"Let's keep Singapore healthy," the yellow and black robodog named SPOT said in English as it roamed around.

"For your own safety and for those around you, please stand at least one metre apart. Thank you," it added, in a softly-spoken female voice.

Despite the niceties, breaches of Singapore's strict lockdown rules can result in hefty fines and even jail.

The city-state of 5.7 million people has more than 21,000 cases, one of the highest tallies in Asia, largely due to mass infections among migrant workers living in cramped dormitories in areas little visited by tourists.

Under rules to enforce the lockdown in place until June 1, residents can only leave their homes for essential trips like grocery shopping and must wear a mask at all times in public.

Exercise outdoors is permissible but must be done alone.Another robot, in the shape of a small car, has been deployed at a nearby reservoir to warn visitors "not to loiter" and that "gatherings are not allowed".

The authorities behind the latest trial - the government technology and cyber security agencies - said in a statement that SPOT could better cross rough terrain in parks and gardens.

As well as broadcasting messages reminding visitors of social distancing measures, SPOT is fitted with cameras and analytics tools to estimate the number of people in the park.

Authorities said the cameras would not be able to track individuals or record personal data.SPOT has also recently been trialled for use at a temporary hospital delivering medicines to patients.