In Bergamo province alone, according to a recent study of death records, the real death toll from the outbreak could be more than double the official tally of 2,060, which only tracks hospital fatalities. 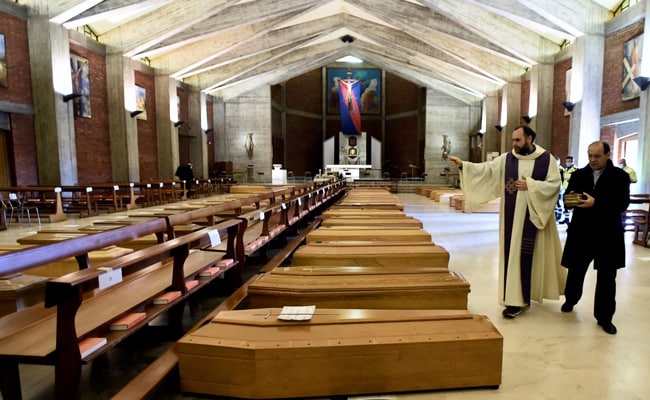 A priest blesses coffins that have been piling up in a church due to high number of deaths in Italy.

It took Silvia Bertuletti 11 days of frantic phone calls to persuade a doctor to visit her 78-year-old father Alessandro, who was gripped by fever and struggling for breath.

When an on-call physician did go to her house near Bergamo, at the epicentre of the coronavirus outbreak in northern Italy, on the evening of March 18, it was too late.

Alessandro Bertuletti was pronounced dead at 1:10 am on March 19, 10 minutes before an ambulance called hours earlier arrived. The only medication he had been prescribed, over the phone, was a mild painkiller and a broad-spectrum antibiotic.

"My father was left to die alone, at home, without help," Bertuletti, 48, said. "We were simply abandoned. No one deserves an end like that."

Interviews with families, doctors and nurses in Italy's stricken Lombardy region indicate that Bertuletti's experience is not uncommon, that scores are dying at home as symptoms go unchecked and that phone consultations are not always enough.

In Bergamo province alone, according to a recent study of death records, the real death toll from the outbreak could be more than double the official tally of 2,060, which only tracks hospital fatalities.

As the global fight to save lives centres on boosting the supply of hospital ventilators, some doctors say a lack of primary healthcare is proving just as costly because medics cannot or will not make home visits, in line with a worldwide tactic of switching to remotely delivered medical advice.

"What led to this situation is that many family doctors didn't visit their patients for weeks," said Riccardo Munda, who is doing the work of two doctors in Selvino and Nembro, two towns near Bergamo, after a colleague caught the virus.

"And I can't blame them, because that's how they saved their own skin."

He said many deaths could be avoided if people at home received prompt medical help, but doctors were swamped, lacked enough masks and suits to protect themselves from infection and were discouraged from making visits unless absolutely necessary.

"Doctors give people at home a treatment. But if this treatment doesn't work, if there is no doctor who checks and changes or adjusts the medicines, then the patient dies."

While hospital workers were given priority access to masks, some family doctors say they went without and so felt unable to visit patients safely.

A spokeswoman for the state-run ATS health agency in Bergamo said authorities in the Lombardy region, rated among the world's most efficient for health services, told family doctors to "deal with patients by phone as much as possible", limiting home visits "to reduce contagion and waste of protective equipment".

She said 142 doctors in the Bergamo area were either sick or in quarantine but they had all been replaced.

Authorities are now moving to reinforce primary care in line with recommendations by the World Health Organization, which says that delivering primary healthcare safely should be a priority for governments right after intensive care capacity.

In Bergamo province six special units of doctors started operating on March 19, each equipped to visit sick people at home. In nearby Milan, where deaths at home and in centres for the elderly more than doubled in the second half of March, similar units began operating only on March 31.

Italy's official death toll reached 15,887 on Sunday, almost a third of the global total, but there is growing evidence that this vastly understates the real total because so many people are dying at home.

A study by local newspaper L'Eco di Bergamo and research consultant InTwig, using data provided by local municipalities, estimates that 5,400 people died in the Bergamo province during the month of March, or six times more than a year ago.

Of these, it reckons that as many as 4,500 people succumbed to the coronavirus - more than double the official tally. This took into account 600 people who died in nursing homes and evidence provided by doctors, it said.

The ATS did not respond to a request for comment on the study's findings.

Pietro Zucchelli, director of the Zucchelli funeral home that serves several villages in the Seriana Valley around Bergamo, said over the past two weeks more than 50 percent of his job had been collecting bodies from people's homes.

Before, most of the dead were in hospitals or nursing homes.

Munda, the doctor working in Selvino and Nembro, said he had been visiting patients at home since late February, administering antibiotics for bacterial pneumonia and oxygen therapy if required.

He said that although antibiotics were no cure for the virus, they could treat some of the debilitating complications and help patients recover without hospitalisation.

To protect himself, he bought 600 euros' worth of face masks which he sterilises at home with steam every evening.

More than 11,000 health workers have contracted the virus in Italy and 80 have died, many of them family doctors.

The Bertuletti family's ordeal shows how primary care, a health system's first line of defence, has sometimes buckled in the face of the coronavirus outbreak.

In several European countries and in the United States, doctors are encouraged to carry out phone consultations whenever possible, rather than seeing patients face to face.

With her own family doctor in hospital, Bertuletti says she repeatedly phoned his replacement, who at first told her to give her father a paracetamol-based painkiller used to reduce fever.

As her father got worse, Bertuletti called him back. "He said: 'I am not forced to do house visits, be patient'," she said.

The doctor who dealt with Bertuletti, contacted by Reuters, declined to be identified, but said through tears that medics had to make terrible choices.

He said that he had been receiving between 300 to 500 phone calls a day and was covering for a sick colleague.

"I had to make a selection, I couldn't visit those who had a cough and fever, I could only go to see the most serious cases."

The association of family doctors in the province of Bergamo estimates that 70,000 people in the area may be infected.

"Despite our best efforts, it's not possible to take everyone to hospital and sometimes families prefer to keep the sick at home out of fear they may not have another chance to say goodbye," Bergamo's mayor, Giorgio Gori, said.

Like him, mayors across Lombardy are crying out for help.

"We have citizens who are sick at home and feel abandoned, I could give you hundreds of examples," Giovanna Gargioni, mayor of Borghetto Lodigiano, wrote in a March 27 letter to regional health authorities on behalf of a group of local mayors.

Even in Milan, Lombardy's main city and Italy's financial capital, doctors say that pledges by regional authorities to provide protective gear like face masks and to give swabs to medical personnel had yet to materialise for some.

"We are working without protection, and no one tested us," said Roberto Scarano, a surgeon and family doctor in the city.

"Meanwhile, the virus is spreading in people's homes, entire families are getting infected and no one's taking care of them."

Ambulances that used to arrive within minutes of a call to emergency services now can take hours, medics say. Oxygen bottles are so scarce that nurses rush to claim them back from bereaved families as soon as patients die.

"We are used to seeing people die, but normally it feels like you are accompanying them at the end of the road," said Maura Zucchelli, a nurse at Itineris, a private company which provides medical assistance at home in the Bergamo area.

Now you go to people's homes, and within 48-72 hours the patient is dead. It's draining. It's like war."