Covid may shrink the current pool of donor organs and affect their future availability. 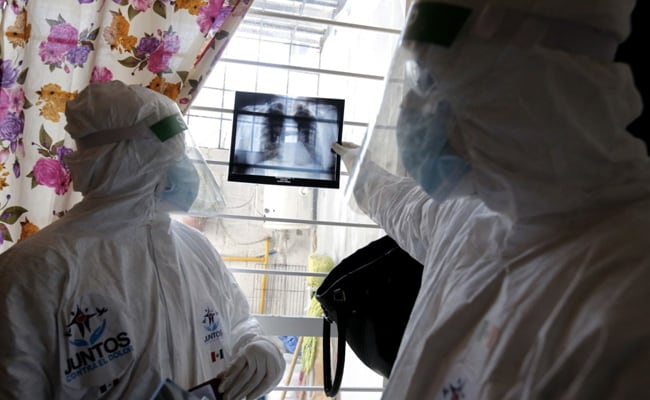 For Covid patients needing a lung transplant, timing is important

John Micklus's battle with Covid-19 began last Christmas and ended five weeks later with lungs so damaged that doctors said there was nothing they could do to save him.

"The doctor's recommendation was to get my affairs in order," Micklus said. The 62-year-old called his wife from his hospital bed in southern Maryland. She, in turn, desperately called several physicians, and eventually learned of one last option: A double-lung transplant.

Micklus was transferred to the University of Maryland Medical Center in Baltimore, where a rigorous assessment qualified him to receive lungs from a matched donor days later. He was discharged from the hospital on March 30, marking the center's second successful lung transplant in a Covid survivor.

Hospitals across the U.S. have reported a rise in lung transplants for severe coronavirus cases, the Cleveland Clinic, one of the country's top-ranked medical centers, said last week. The grueling surgery may be the only solution for patients who experience a life-threatening constellation of lung damage inflicted by the virus, a hyper-inflammatory immune response to it, and the body's failure to properly repair the injury.

All of that can cause the deposition of yellow fibrotic scar tissue, creating a "honeycomb change" that makes the lungs completely solid, said David Kleiner, who heads autopsy pathology in the National Institutes of Health Clinical Center in Bethesda, Maryland.

The process irreversibly destroys the tiny grape-like air sacs through which gas is exchanged in the lungs, Kleiner said in a lecture on Covid autopsies in July. "Patients really only survive to that fibrotic stage if they are intubated," he said, adding that the harmful scarring can occur within a couple of weeks of lung injury.

Such cases have led to lung transplants around the world, according to a study in The Lancet Respiratory Medicine journal last month, highlighting yet another dimension of the pandemic's burden on both survivors and health-care resources.

The procedure can be done successfully in carefully selected patients, said the authors from the U.S., India, Austria and Italy, who proposed criteria for selecting suitable Covid patients.

In patients who can't be weaned from a ventilator or an artificial lung that oxygenates blood, a donor organ may be the only life-saving option, according to doctors at Chicago's Northwestern Memorial Hospital, where the first double-lung transplant in a Covid case in the U.S. took place in June 2020. It's done 18 more since, and has at least five patients waiting for donor organs, Ankit Bharat, the hospital's chief of thoracic surgery and surgical director of lung transplantation, said in the Journal of the American Medical Association Thursday.

"We are seeing a significant surge in patients who recovered from moderate to severe Covid and are now coming to the outpatient setting with progressive oxygen requirements and pulmonary fibrosis," Bharat said.

Writing in a study in Science Translational Medicine in December, Bharat and colleagues described three patients -- aged 28, 43 and 62 -- whose surgeries each took about 9.5 hours, required double the amount of blood normally infused during the procedure, and involved two weeks of post-operative intensive care.

More than 107,000 people are waiting for a life-saving organ transplant in the U.S., according to the United Network for Organ Sharing. Waiting lists for a full lung transplant, where the organ is provided by donors who have died, are often prohibitively long.

Bharat said he's concerned Covid may shrink the current pool of donor organs and affect their future availability. Almost 33 million people in the U.S. have been diagnosed with the disease, he said, adding that there are reports that up to 80% of them, including many who were asymptomatic, may suffer lung injury.

"It remains to be seen whether or not other patients who have recovered from mild, moderate, or even severe Covid-19 are going to be organ donors," Bharat said. "If not, this may lead to a significant contraction of our donor pool."

For Covid patients needing a lung transplant, timing is important. If they're done too early, there's a risk that the patient hasn't cleared the coronavirus infection, said Robert Reed, associate medical director of the lung transplant program at the University of Maryland Medical Center, who helped care for Micklus.

You also "can't do it too late, because at that point, patients may be so weak they cannot survive the operation and meaningfully participate in rehabilitation," Reed said.

Doctors in Japan reported in April the world's first "living donor" transplant in a Covid patient who received lung segments from her son and husband. The procedure at Kyoto University Hospital took a team of 30 medical personnel about 11 hours to perform.

"We demonstrated that we now have an option of lung transplants" from living donors, Hiroshi Date, a thoracic surgeon at the hospital who led the operation, told reporters.

Reed, who is also a professor of pulmonary and critical care medicine at the University of Maryland, said transplant surgery shouldn't be seen as a way to speed up post-Covid recovery. Lung recipients need to take more than a dozen medications for the rest of their lives to prevent organ rejection and infections, and many of the drugs come with toxic side effects.

"You would probably rather have a long run of slow rehab and have your own lungs in there than to get a transplant," Reed said in an interview over Zoom. "But for people that are likely going to die in two years and for people who are essentially crippled by their lungs, it can be just amazing."

Micklus wants others suffering end-stage lung damage caused by Covid-19 to know that lung transplants may offer hope. "It's tough to do," he said, choking back tears. "It's physically, emotionally draining, but it's an opportunity to live again."