The extremely rare sighting triggered wonder and excitement when the whale was first seen on Tuesday, but after it was spotted again on Wednesday in exactly the same location, concerns grew that the beluga had got lost and was potentially in danger 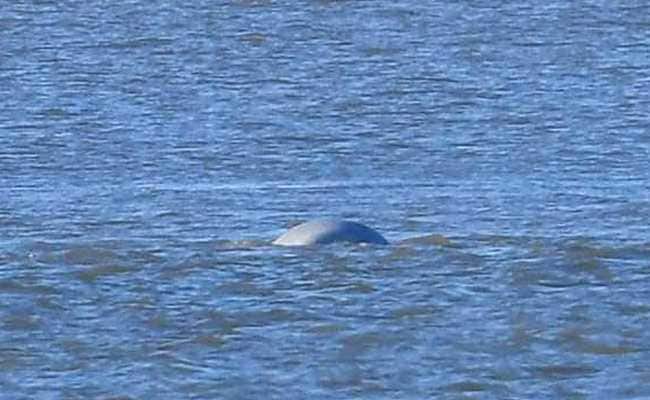 Concerns were growing Wednesday for a beluga whale spotted in the River Thames estuary outside London, thousands of kilometres (miles) from the cherished white species' natural home in Arctic waters.

The extremely rare sighting triggered wonder and excitement when the whale was first seen on Tuesday, but after it was spotted again on Wednesday in exactly the same location, concerns grew that the beluga had got lost and was potentially in danger.

Rob Lott, a marine mammal scientist at the Whale and Dolphin Conservation wildlife charity, said the cetacean was being monitored in case it strands on a sandbank.

"The longer it stays in the Thames estuary then it will become more of a concern," he told BBC radio.

"Hopefully instinct will soon kick in and the beluga will leave the estuary and go out into the North Sea and then head north where it should be," the scientist explained.

"Beluga whales are a species of the icy Arctic -- finding one in the tepid Thames is an astonishingly rare event," said Rod Downie, polar chief adviser at WWF, the World Wide Fund for Nature.

The last reported sighting of a beluga in UK waters was in 2015, when two were spotted off the northeast coast of England and one in Northern Ireland.

Rescue teams are on standby in case the whale gets into danger.

"We wouldn't go anywhere near it in a boat. We could just do more harm than good."

The beluga was first sighted on Tuesday near the southern Kent side of the river, downstream of Gravesend.

It was feeding around moored barges and did not move more than 200 metres during the day.

Ornithologist Dave Andrews, who first spotted the whale, said it was back in the same place on Wednesday.

"The Thames beluga is back feeding in its favoured spot around the barges on the Kent side," he said urging all boats to "keep clear and let it alone".

The Thames remains a busy waterway. The whale's location is between two major container docks, Tilbury and the new London Gateway port.

Belugas typically live for 40 to 60 years. Highly sociable, they typically form pods and are often seen in river estuaries in the summer.

The beluga's appearance brings back memories of the famous 2006 Thames whale.

A female northern bottlenose whale was discovered swimming in the river in central London, going past the Houses of Parliament.

On its second day in the city, as it lost strength, rescuers intervened and lifted it onto a barge by crane. It died, after suffering from convulsions, near Gravesend as the barge rushed towards the open sea.