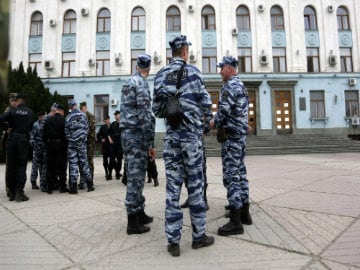 Pro-Russian militia and police in Crimea detained several reporters Saturday and Sunday, with one reporter, Osman Pashayev, complaining that he was robbed and kicked while in detention.

"They had me stand and face the wall for four hours," he wrote on Facebook, adding that some of his equipment had been stolen.

"They didn't beat me too much, just a few times on the legs," he said, blaming the so-called "self-defence" forces of Crimea, a militia that formed at the end of February and assisted the Russian takeover of the peninsula.

Another independent video reporter, Artur Moryakov, who was filming at a rally of Crimean Tatars on Sunday, was detained for about four hours, a colleague told AFP.

"He was filming police cars, riot police, and he was detained for several hours. He was searched and questioned by police and the federal security services," a representative of Project Reality, a documentary film project, told AFP.

Several thousand Crimean Tatars defied a ban on Sunday to mark the 70th anniversary of their deportation by Stalin amid a massive security presence including military helicopters.

A Polish reporter with Gazeta Wyborcza newspaper earlier was arrested and held for about six hours by the FSB security service, who accused him of writing "anti-Russian texts".

In eastern Ukraine meanwhile two reporters of Russian website Life News were reportedly arrested by Ukrainian troops near the city of Kramatorsk, prompting a furious reaction from Moscow.

The website said reporters Oleg Sidyakin and Marat Saichenko were in the custody of the Ukrainian national guard who were "using violence" against them.

The Russian foreign ministry demanded they be immediately released.