Out Of Oxygen, Climbers Stuck In Everest 'Jam' Pleaded To Make Way: Guide

At least 10 people died trying to reach the summit of the world's tallest mountain this year, the deadliest climbing season for the peak in four years. 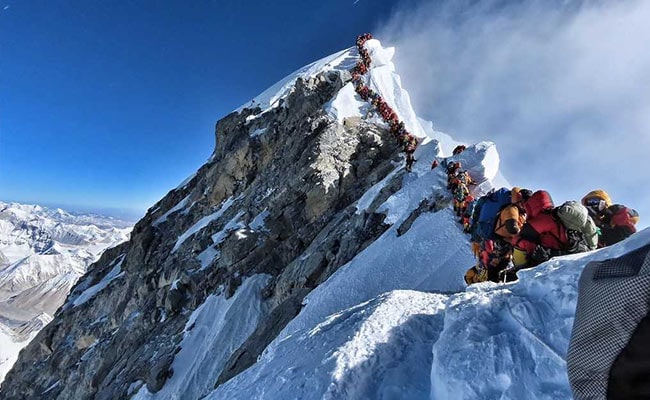 The Nepali government granted 381 permits to climb the mountain this year, a record

Chatur Tamang was on his way to the roof of the world when he hit a traffic jam.

Ahead of him, on the final ascent to Mount Everest, he saw more than 100 people bunched together on the narrow ridge that leads to the summit - a place so high that it is known as the "death zone," where the human body has trouble functioning.

Some of those descending from the summit pleaded desperately with those ascending to clear a way for them to pass since they had run out of oxygen. "That sent chills down my spine," said Tamang, 45, a mountaineering guide who lives in Russia. He fears that if no action is taken, the crowds next year could be worse, with potentially fatal consequences.

At least 10 people died trying to reach the summit of the world's tallest mountain this year, the deadliest climbing season for the peak in four years. One factor contributing to this year's toll appears to have been crowding as scores of people attempted to ascend in a short window of good weather, producing delays that extended the time climbers spent at deadly altitudes.

Now officials in Nepal are reviewing whether to change the way access to Everest works. Some experts say that the government should extend the climbing season in May or implement certain requirements for climbers, a number of whom lack experience or sign on with companies offering bargain-priced expeditions.

Nirmal Purja, an accomplished climber who is attempting to summit 14 peaks worldwide within seven months, was on his way down from the summit at Everest when he decided to stop and photograph the scene behind him. It was unusually cold, he said, and extraordinarily crowded.

"I've seen traffic, but not this crazy," said Purja, who has summited Everest four times. Purja is among those who believe that the solution is to lengthen the traditional climbing season at Everest to spread out the climbers attempting to reach the summit.

The Nepali government granted 381 permits to climb the mountain this year, a record. At least double that number of people were on the mountain, since the figure does not include guides. Because of the crowds, some climbers took longer than normal to make their way up the mountain. One of them was Nihal Bhagwan, a 27-year old Indian man who died of dehydration, exhaustion and high-altitude sickness, said Keshav Paudel of Peak Promotions, the expedition company guiding Bhagwan's trip.

Bhagwan spent two days each at two intermediary points on the climb, said Paudel, though he should have spent only one at each place. Already weak when he climbed to the summit, Bhagwan became totally depleted while descending, said Paudel, who attributed his death both to the traffic and extreme exhaustion. Others who died this year included two other Indians, two Britons, two Irish citizens and one American.

Some involved in the trekking business said what had unfolded on Everest last week was not abnormal and a reminder of the deadly stakes involved. "If you are setting out on an Everest expedition, it is no less than heading for a war," said Mingma Sherpa of Seven Summit Treks. Climbing Everest is like "attaining the highest pilgrimage," he continued, and sometimes delays are unavoidable. "It is just like waiting for your turn outside a temple."

Others saw the traffic as an indication of how climbing Everest has become a commodity, drawing inexperienced thrill-seekers and polluting the mountain with garbage. Seeing the "anxiety-inducing conga line in the death zone," it is "not only dread you sense, but hubris, too," wrote Peter Beaumont in the Guardian. Climbing the world's tallest peak "has become a trophy experience."

But Nepali officials are reluctant to curb the number of climbers, who are also an important source of revenue for the country.

"The government cannot just say no to the tourists who come to ask for permits," said Meera Acharya, director at the Department of Tourism with responsibility for mountaineering. "Personally, I feel that it is not as much about the number of permits as what kind of climbers we are issuing the permits to." After this year's expeditions are concluded, Acharya said officials would analyze the data and determine how to move forward.

"The mountain is for every human being," said Purja, the climber attempting to summit 14 of the world's highest peaks. But it has "to be managed properly."