Chinese defence ministry spoksperson evaded answer to a question over the absence of the Pakistan Navy ships in the fleet review. 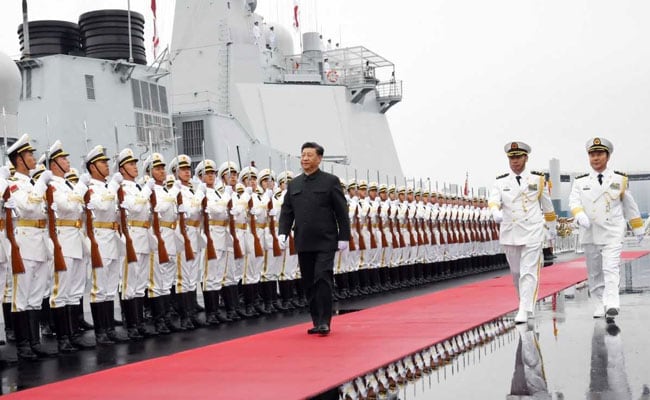 The Chinese military said on Thursday that it "always attached importance" to relations with the Indian and Pakistani counterparts and was ready to make more efforts to advance the ties, but kept silent over the absence of ships from its all-weather ally at the fleet review of the 70th anniversary celebrations of China's navy.

Two Indian battle ships, including INS Kolkata - the biggest indigenously built stealth destroyer - along with INS Shakti - one of biggest fleet support ships - took part in the fleet review at Qingdao on April 23 which was presided over by Chinese President Xi Jinping.

Significantly, conspicuous by their absence were the ships of Pakistan Navy at the parade. The Pakistan Navy reportedly could not send its ships to PLAN's most celebrated moment despite the all-weather relations due to the recent Indo-Pak hostilities after the deadly Pulwama terror attack in February.

Asked how China viewed the participation of the Indian Navy ships, Chinese defence ministry spokesman Col Ren Guochang told a media briefing that more than 60 countries sent their naval delegations and 13 countries have sent their ships to take part in the review.

He said the Chinese navy's 70th anniversary celebrations will "undoubtedly concretise the friendship and mutual relations between the PLA Navy (PLAN) and its international counterparts."

He, however, evaded answer to a question over the absence of the Pakistan Navy ships in the fleet review.

Col Ren was critical of the French naval ship which was scheduled to take part in the PLAN celebrations. China reportedly withdrew the invitation to the French naval ship Vendemiaire on the ground that it trespassed into Chinese waters at the Taiwan Strait, which Beijing claims as part of it.

Also significantly while arriving to take part in the PLAN's grand event, the Indian Navy ships came through Taiwan Strait, the narrow strip of waters of the Pacific that separates, China and Taiwan.

China protested to the US on March 25 when two American naval ships sailed through the Taiwan Strait.

In his media interaction after the arrival of the Indian ships, Commander of INS Kolkata, Captain Aditya Hara when asked whether the Indian ships came through Taiwan Strait said in April 21 during a media interaction at Qingdao that the India ships did pass through the Taiwan Strait and that the transit was made in accordance with international law. Chinese ships were present in the Straits to offer assistance for a safe passage, he said.