The meetings come on the third and final day of Xi's first visit to Saudi Arabia since 2016 and only his third overseas trip since the coronavirus pandemic began. 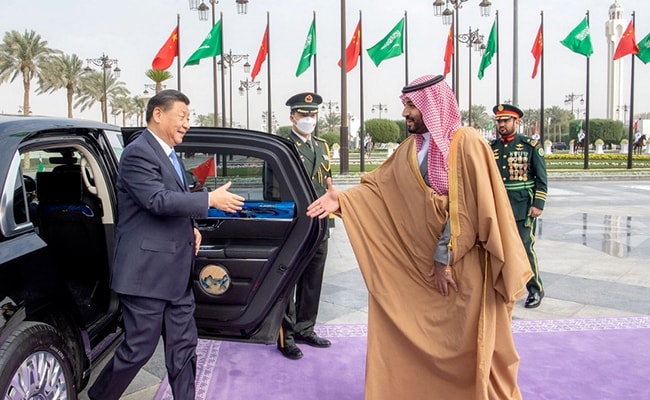 State media have said that deals worth about $30 billion were expected to be signed during the visit.

Chinese President Xi Jinping will meet Arab leaders at summits in Riyadh on Friday after striking a series of agreements with Saudi Arabia, strengthening ties as the top oil exporter quarrels with Washington.

The leader of the world's second biggest economy will sit down with regional rulers on the third and final day of his trip, only his third journey outside China since the coronavirus pandemic began.

After talks with King Salman and his 37-year-old son Crown Prince Mohammed bin Salman, the de facto ruler, the two sides stressed "the importance of stability" in oil markets -- a point of friction with the United States, which has urged the Saudis to raise production.

In a joint statement, they also spoke of "focusing on emissions rather than sources" in tackling climate change, the approach championed by the resource-rich Gulf monarchies.

Forty-six agreements and memorandums of understanding were announced on everything from housing to Chinese language teaching. Both sides are seeking economic and strategic benefits by deepening cooperation.

However, few details were released despite a Saudi state media report on Thursday that about $30 billion in deals would be signed during Xi's visit.

The two sides "stressed the importance of continuing joint action in all fields, deepening relations within the framework of the comprehensive strategic partnership between the two countries, and reaching new and promising horizons", the statement said.

Xi's visit comes at a time of tension between Saudi Arabia and the United States, its long-time partner and security guarantor, over oil production, human rights issues and regional security.

It follows US President Joe Biden's trip to Jeddah in July, before mid-term elections, when he failed to persuade the Saudis to pump more oil to calm prices.

State television showed leaders from the six-country, resource-rich Gulf Cooperation Council -- including the Qatari emir and Bahraini king -- arriving at the conference venue in Riyadh on Friday.

Prince Mohammed addressed the group, briefly reiterating the kingdom's positions on regional issues such as the war in Yemen. They met privately, to be joined later by Xi and his delegation.

A broader China-Arab summit will follow the China-GCC talks.

The Gulf countries, strategic partners of Washington, are bolstering ties with China as part of an eastward turn that involves diversifying their fossil fuel-reliant economies.

At the same time China, hit hard by its Covid lockdowns, is trying to revive its economy and widen its sphere of influence, notably through its Belt and Road Initiative which provides funding for infrastructure projects around the world.

Officials have provided few details about Friday's agenda, but one potential area is a China-GCC free trade agreement that has been under discussion for nearly two decades.

"China will want to draw the lengthy negotiations to a close, as FTAs with major trading blocs is a matter of prestige for Beijing," said Robert Mogielnicki of the Arab Gulf States Institute in Washington.

"It's not as simple for the GCC states, which seem to be more invested in advancing bilateral ties and are engaged in varying degrees of regional economic competition with their neighbouring member states."

A breakthrough on the trade pact could help Saudi Arabia, the Middle East's biggest economy, diversify its economy in line with the Vision 2030 reform agenda championed by Prince Mohammed.

China's foreign ministry has described Xi's trip as the "largest-scale diplomatic activity between China and the Arab world" since the People's Republic of China was founded.

The visit has already earned a rebuke from the White House, which warned of "the influence that China is trying to grow around the world". Washington called Beijing's objectives "not conducive to preserving the international rules-based order".