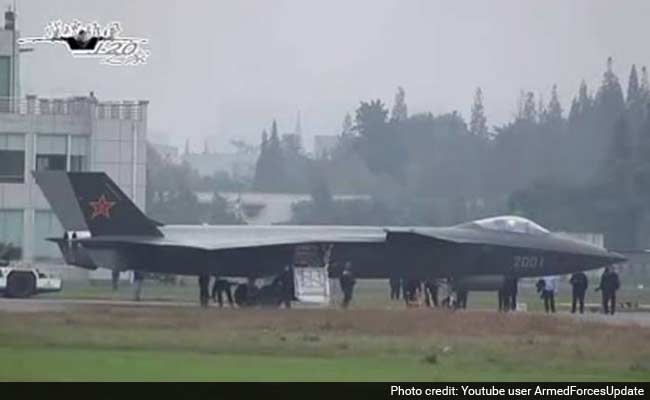 A video still of the J-20 fighter jet.

China's prototype stealth fighter, the J-20, has made a rare appearance on screen after a brief shot of it was included in a new Chinese air force recruitment video.

The J-20 had its first test flight in early 2011 - at the same time then-US defence chief Robert Gates was visiting China - but since then few images of it have surfaced.

In the air force video, entitled "Heroes' Sky" and released on Thursday on Chinese video-sharing websites, the aircraft can been seen very briefly taking off, interspersed between other images of older fighters amid stirringly patriotic slogans.

The six-minute film is split into three parts, called "The sky needs you", "The future belongs to you", and "The nation calls on you".

It also shows female pilots and another new type of aircraft, the Y-20 military transport aircraft.

While China is still only in the early stages of testing stealth technology and any deployment is likely years away, it could eventually help narrow the military gap with the United States.

However, the latest pictures may heighten concern about China's military build-up as it presses its claims to most of the South China Sea, including the deployment of its first aircraft carrier and new anti-ship and anti-satellite ballistic missiles.

Some analysts have said that the J-20 photos suggest that China may be making faster-than-expected progress in developing a rival to Lockheed Martin's F-22 Raptor, the world's only operational stealth fighter designed to evade detection by radar.
© Thomson Reuters 2015
Comments
ChinaUnited StatesJ-20F-22 RaptorF-22Chinese air force