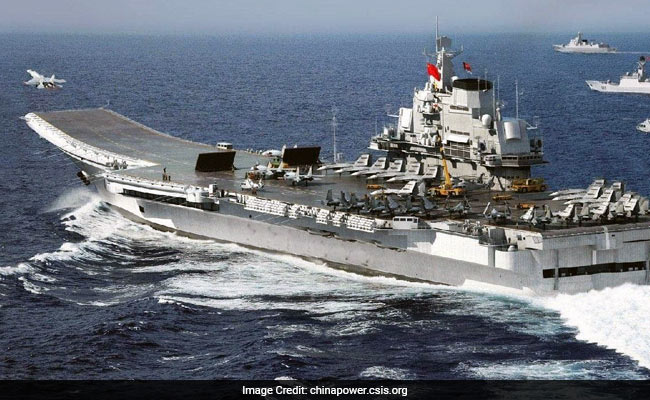 Beijing: China continued to flex its muscles in the South China Sea, with its first aircraft carrier conducting exercises in the disputed area with a flotilla of naval ships amid tensions with the US following President-elect Donald Trump's telephone call to the Taiwanese president.

The formation, which is on a "cross-sea area" training exercise, involved J-15 fighter jets, as well as several ship-borne helicopters, the official said without mentioning specific numbers.

Complex hydrological and meteorological conditions in the South China Sea as well as a cold front in area have posed some challenges, but the drill provided important experience in the build-up of combat capability of the aircraft carrier formation, he said.

Chinese officials also say that the carrier is conducting a a series of exercises to test its systems and to work out an appropriate formation of ships and submarines to move along with it.

Liaoning, a refit of the Soviet era warship, has been pressed into exercises in the middle of last month during which it conducted maiden live fire drills on a massive scale along with a host of naval ships, aircraft and submarines, four years after it was commissioned.

China is currently building its second aircraft carrier. Chinese navy said the drills conducted in the Bohai Sea involved dozens of ships and aircraft as well as several air-to-air, air-to-ship and ship-to-air missiles.

Liaoning has been conducting exercises since then and even travelled close to Taiwan in a show of strength.

The exercises followed as China struck a more aggressive postures over the disputed South China Sea issue amid Trump's rhetoric over One China policy.

Subsequently, Chinese navy also seized an unmanned underwater vehicle (UUV) of the US in the South China Sea and returned it about a week later, saying that it picked the unidentified drone to ensure safety of the navigation.

Promoted
Listen to the latest songs, only on JioSaavn.com
China has become more assertive over the South China Sea after an international tribunal struck down its claim over almost all of the area.

The Philippines, Vietnam, Malaysia, Brunei and Taiwan also have counter claims over the South China Sea.