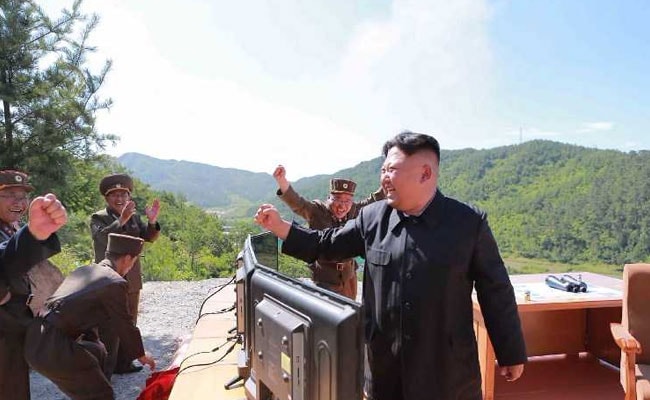 Beijing, China: China on Thursday warned against "words and deeds" that could heighten tensions over North Korea, after Pyongyang tested an intercontinental ballistic missile that Kim Jong-Un dubbed a gift to "American b*******".

Tuesday's launch marked a milestone in Pyongyang's decades-long drive for the capability to threaten the US mainland with a nuclear strike, and poses a stark foreign policy challenge for Donald Trump.

"We also call on relevant parties to stay calm, exercise restraint, refrain from words and deeds that may heighten tensions, and jointly make effort for the easing of tensions," foreign ministry spokesman Geng Shuang told reporters.

US Ambassador to the UN Nikki Haley told the UN Security Council Wednesday that Washington was ready to use force if need be to deal with the threat of a nuclear-armed North Korea and singled out China as key to any diplomatic solution.

Her comments came after US President Donald Trump berated China on Twitter, saying that the country's trade with North Korea had surged by almost 40 percent in the first quarter.

The United States is pushing for tougher sanctions on North Korea following the ICBM test.

But, he added, "as a neighbouring country of the DPRK, China has maintained normal economic relations and trade. According to the DPRK-related resolutions, relevant economic sanctions should not harm the livelihood and normal humanitarian need of the DPRK," he said, using the initials of North Korea's official name.

Trump has pushed China to put economic pressure on its Communist ally economically to strongarm the Stalinist regime into abandoning its nuclear and missile programmes.

Official Chinese customs data shows a 37.4 percent rise in yuan terms in overall trade and 30.6 percent in US dollars.

But China decided to stop buying North Korean coal in February and total imports from the North have steadily dropped every month from $207 million in January to $99 million in April.

"Trade between China and North Korea grew almost 40% in the first quarter. So much for China working with us - but we had to give it a try!" Trump tweeted on Wednesday.

The US leader had until recently nurtured friendly ties with Chinese President Xi Jinping, hosting him at his Mar-a-Lago resort in Florida in April, when they agreed on a 100-day plan to improve US-Chinese trade relations.

The two leaders are due to meet again at the Group of 20 summit in Germany, which runs Friday and Saturday.

(Except for the headline, this story has not been edited by NDTV staff and is published from a syndicated feed.)
Comments
Donald TrumpNorth KoreaUN Nikki Haley