China To Gift Half Million Doses Of Sinopharm Vaccine To Pakistan

Pakistani regulators approved the Sinopharm vaccine for emergency use on Monday, two days after AstraZeneca's vaccine developed with Oxford University was also approved. 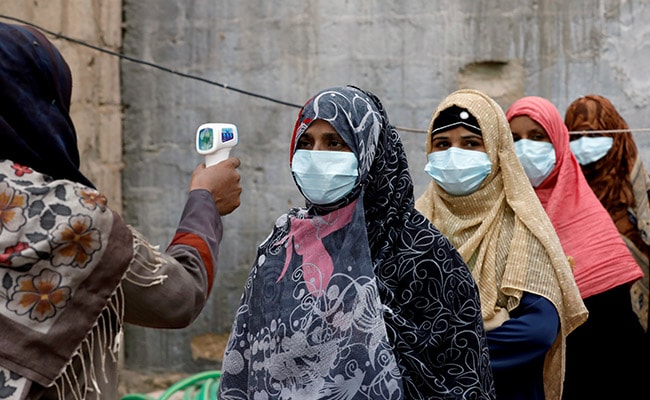 Vaccinators wear protective masks as they get their temperature checked in Karachi.

Pakistan's Foreign Minister Shah Mehmood Qureshi said on Thursday that China has agreed to provide half a million doses of the Chinese Sinopharm COVID-19 free of cost to Pakistan by January 31.

"They have said send your aircraft and airlift this vaccine immediately. So this is a happy bit of news for us, and we will hopefully be successful in protecting ourselves using this vaccine," Qureshi said at a press conference in Islamabad.

Pakistani regulators approved the Sinopharm vaccine for emergency use on Monday, two days after AstraZeneca's vaccine developed with Oxford University was also approved.

"I thanked them and also told them we need more than this, and in the future we will need 1.1 million doses, and they reassured us and said by the end of February we plan to meet this requirement for you as well," Qureshi added.

Qureshi said he had also raised the possibility of jointly manufacturing vaccines with China.

Pakistan is also nearing completion of a phase three trial of another Chinese vaccine from Cansino Biologics Inc. Some 17,500 people had enrolled in the trial so far, and initial results would be available in the beginning of February, health minister Faisal Sultan said at a press conference on Wednesday. Sultan said if the Cansino vaccine proved effective Pakistan could look to procure 20 million doses. Sultan said Pakistani officials had also been meeting with UK officials for discussions on procuring vaccines from there.

Pakistan is hoping to eventually vaccinate at least 70% of its adult population to achieve herd immunity, Sultan said. The country's existing Expanded Programme on Immunization, which handles a number of vaccines including polio, was being strengthened to help distribute the coronavirus vaccine.