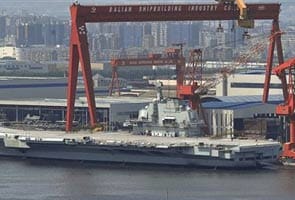 The 1,000-feet vessel is designed to carry 26 aircraft and 24 helicopters.

The vessel, the former Soviet aircraft carrier Varyag, has been overhauled for its new role as a platform for research and naval pilot training at the Dalian shipyard in Northeast China.

The Admiral Kuznetsov class aircraft carrier was 70 percent complete when China bought it from Ukraine for $20 million in 1998. Before being sold, the ship was disarmed and its engines were removed.

Promoted
Listen to the latest songs, only on JioSaavn.com
China started a total overhaul of the ship in 2005, along with the development of carrier-based aircraft.

Chinese military experts believe that the vessel could be commissioned by the Chinese Navy in a few years.