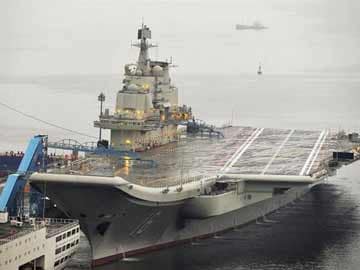 China's first aircraft carrier, which was renovated from an old aircraft carrier that China bought from Ukraine in 1998, is seen docked at Dalian Port (File pic from Reuters)

China is planning to build three more aircraft carriers for deployment in the disputed South China Sea amid the escalating maritime stand-offs with its neighbours and the US' big push into Asia-Pacific.

While there is no official confirmation to the plans of additional aircraft carriers, Chinese defence expert Cao Weidong said that China pursues a defensive national defence policy and four aircraft carriers are appropriate for its present need especially for the deployment in South China Sea where China is entangled in maritime disputes with Vietnam, the Philippines, Malaysia and Brunei.

"If China has four aircraft carriers, with two in the South China Sea and two in northern China, they can better accomplish their missions," he was quoted as saying in the official People's Daily online.

Aircraft carriers are typically required for training, maintenance and duty.

So far, China only has Liaoning, as its sole aircraft carrier. Launched in September 2012, the Liaoning, which was refurbished after its hull was bought from Ukraine is in operation since 2013.

On the size of the aircraft carrier, he said 60,000-80,000 tonnes carriers are appropriate for China's needs at present and there is no need to build 100,000 tonners or larger carriers like the United States.

The displacement of an aircraft carrier will greatly affect its combat capability, the daily said.

In addition to refurbishing the ship, China also had to build an aircraft suitable to operate from its deck. In May 2013, China's first carrier-based air force was established and completed its first joint training.

Last year, Liaoning returned to Dalian for a four-month overhaul.

China claims most of the South China Sea, a vital sea lane and fishing ground that is believed to hold vast mineral resources. But the Philippines, Vietnam, Brunei and Taiwan also have overlapping claims over the waters.

Promoted
Listen to the latest songs, only on JioSaavn.com
Beijing is also having a raging dispute with Japan over uninhabited islands in the East China Sea which has caused major upheaval in the relations between the two countries.

China is also seriously concerned over the US' Asia Pivot push siding with Japan and ASEAN countries to press for resolution of the maritime disputes.