Inside China's Swanky Hotel Built In A Pit, With Suites Below Water Level

The subterranean 17-floor hotel is about an hour's drive from the centre of Shanghai, with room charges starting at 3,394 yuan ($490) a night. 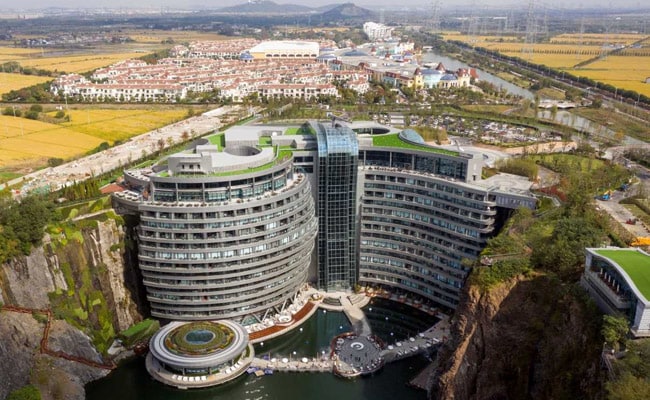 A hotel development sunk into a disused quarry in China opened its doors Thursday to deep-pocketed clientele.

Preventing the 88-metre-deep (290 feet) pit from flooding was among the chief challenges for engineers working on the swanky 336-room Inter Continental Shanghai Wonderland -- part of a $288 million development that also includes a theme park.

The hotel, which is one of a growing number of bold architectural designs springing up in China, hugs one side of the pit wall, with a waterfall cascading down the opposite face.

The subterranean 17-floor hotel is about an hour's drive from the centre of Shanghai, with room charges starting at 3,394 yuan ($490) a night.

There is a floor of suites below the water level, but don't expect to gaze directly into the depths of Shenkeng Quarry -- the windows are instead buffered by large fish tanks.

"Why do we say there is nothing in the world that compares to the quarry hotel project?" Chen Xiaoxiang, chief engineer with the real estate giant, Shimao Property, said to news agency AFP.

"It's a project that's completely new, a project we have never encountered before."

"There were no references, cases or experience we could learn from to solve all the difficulties," he said.

That meant engineers were met with unexpected problems.

Before construction started in 2013, for example, heavy rainfall caused a nearby river to overflow into the quarry, filling half of it.

"If something like that had happened after construction was complete, it would have been a devastating blow," Chen said.

Designers built an embankment around the edge of the pit to prevent that happening in future, when hundreds of well-heeled guests are sipping cocktails on the deck far below.

A pump house is used to help regulate water levels. 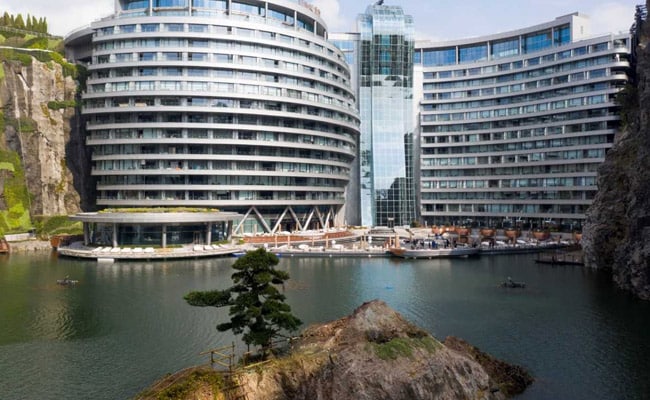 The waterfall is one of the development's most eye-catching features. Adventurous guests can also indulge in rock climbing.

"This was a totally unique idea, to really do something special with a site that was forgotten and nobody knew what to do with, and to give it new life," said Martin Jochman, a British architect with the project since it started 12 years ago.

"I never lost my belief that it would be done one day, but it is here now, and I am really excited and amazed by the whole thing," he said.

China's rapid economic growth has been accompanied by a construction boom that often throws up outlandish designs.

The Beijing headquarters of state broadcaster China Central Television has been nicknamed "The Big Underpants" because it resembles a giant pelvis.

A skyscraper built this year in southwestern China features a 108-metre waterfall tumbling down one side.