Read inOther Languages
This Article is From Apr 25, 2014 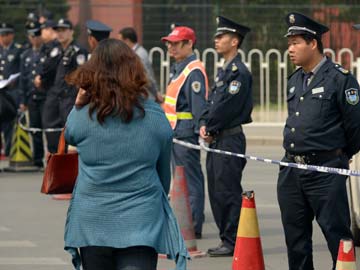 Security personnel stand guard at the entrance of a road to Malaysian embassy as grieving relatives of passengers on Malaysia Airlines flight MH370 protest outside the Malaysian embassy in Beijing on April 25, 2014.

The protest followed a chaotic meeting on Thursday between airline staff and relatives who have been waiting for nearly 50 days without any sighting of the plane, prompting police to step in to separate both sides.

About two-thirds of the 239 passengers aboard the missing plane came from China, and many of their relatives have waited with frustration at a hotel in Beijing for updates, often venting at airline or government officials who come to brief them.

"I spent the whole night outside the embassy, there are still many people waiting outside," said Wen Wancheng, whose son was on the flight. He estimated that several dozen took part in the protest.

Relatives, who are staying at the hotel at the airline's expense, previously banned a Malaysian embassy official from attending daily briefings at the hotel, but are now demanding that the embassy send a replacement, Wen said.

Steven Wang, another relative, said about 100 people had waited outside the premises overnight. "We want somebody from the embassy to come out and tell us why they didn't come," he added.

Police fanned out around the embassy on Friday morning, barring reporters from nearing the building. Embassy staff were not immediately available for comment.

Chinese relatives have for weeks complained bitterly about what they call Malaysia's secretive and incompetent handling of the search.

Tensions boiled over at Thursday's briefing, with some relatives claiming to be on "hunger strike" after airline representatives said a Malaysian embassy official would not arrive to answer their questions.

Nothing has been seen of the plane or its 239 passengers and crew since it vanished off radar screens during a flight from Kuala Lumpur to Beijing on March 8.

Promoted
Listen to the latest songs, only on JioSaavn.com
A multi-national search is continuing in a remote area of the Indian Ocean off western Australia where the plane is now believed to have crashed after veering dramatically off course.