The world got a glimpse of China's newest and most advanced defense technology, as a mass military pageant rolled through Beijing on China National Day. 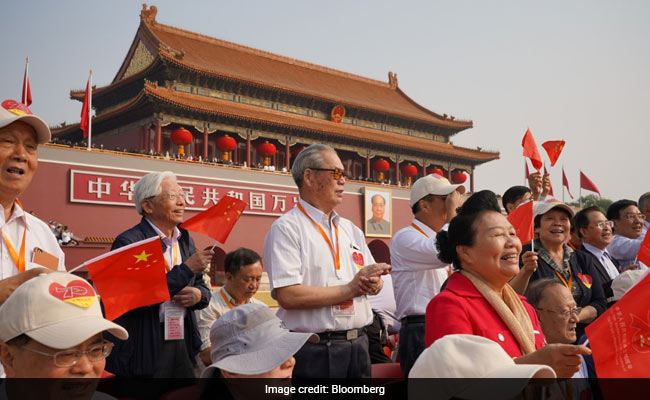 National Day of China: The Chinese flag was raised as Xi Jinping sang along with the country's anthem.

Chinese President Xi Jinping kicked off a parade marking 70 years of Communist rule in China, as pro-democracy protesters in Hong Kong planned to upset the celebrations with a series of potentially violent protests.

The Oct. 1 National Day events in Beijing include a speech from Xi, as well as a military parade past Tiananmen Square expected to show off China's most advanced weaponry, including ballistic missiles and warplanes. In Hong Kong, where protests have rocked the financial hub for 17 straight weekends, residents braced for numerous protests to push back against China's tightening grip over the city.

A guide to China's Oct. 1 celebrations:

Here's the latest (all times local):

Hong Kong's police said they had made 16 arrests so far on Tuesday, with charges including participating in an illegal assembly and the illegal possession of offensive weapons. Those arrested were between the ages of 17 and 36, officials said at a briefing. More than 1,500 people have been arrested since demonstrations kicked off in early June, and amnesty for those detained has become one of the pro-democracy movement's major demands.

The world got a glimpse of China's newest and most advanced defense technology, as a mass military pageant rolled through Beijing. Roughly 40% of the armaments will be shown officially for the first time, according to Chinese state television. That includes the Dongfeng-17, or DF-17, a ballistic missile with a hypersonic glide vehicle that can execute evasive maneuvers at superfast speeds to evade existing missile defense systems. There was also the DF-41 -- one of the world's longest-range missiles -- which is capable of hitting the continental U.S.

Xi vowed to press ahead with the "complete unification of the country" in a speech to start a grand military parade through Tiananmen Square. The address, which referenced similar remarks Mao Zedong made proclaiming the People's Republic's founding on Oct. 1, 1949, briefly touched the status of Hong Kong, saying China remained committed to the "one country, two systems" framework that has governed the Asian financial center since its return from British rule in 1997.

"China yesterday is already engraved in the history of mankind," Xi said, wearing the dark tunic Communist Party chiefs don for such occasions. "China today is created by hundreds of millions of hard-working Chinese. And China tomorrow will be even more prosperous."
The president, who also serves as head of the Communist Party's Central Military Commission, then rode past the assembled troops standing in the sunroof a dark Red Flag limousine. "Follow the party! Fight to win! Build exemplary conduct!" the troops chanted as he passed.

Xi arrived in Beijing's Tiananmen Square accompanied by current and former state leaders, including predecessors Hu Jintao, 76, and Jiang Zemin, 93. Chinese Premier Li Keqiang gave an official pronouncement to start the ceremony, followed by an honor guard marching from the Monument to the People's Heroes across the square to the fire of a 70-gun salute. The national flag was raised as Xi sang along with the country's anthem, "March of the Volunteers."

The Chinese capital was wreathed in a visible layer of thick smog Tuesday morning as columns of Chinese troops lined up for the military parade in Beijing. The city was ranked the seventh most polluted city in the world by AirVisual, while the U.S. embassy air pollution monitor in Beijing showed an air quality index of 159. Generally, policy makers in Beijing -- who have been praised for making progress on smog in recent years -- try and reduce air pollution ahead of major events by shutting down industry or through other measures. A number of other Chinese cities -- including Chengdu, Guangzhou, Shenzhen and Chongqing -- were among the top 12 most polluted cities in the world along with Hong Kong, according to AirVisual.

Personnel and military equipment are ready for the grand military parade to celebrate the 70th anniversary of the founding of People's Republic of China, which will kick off around 10:00 BJT Tuesday. #PRC70thAnnivpic.twitter.com/041SmNr1vV

Hong Kong's acting leader, Matthew Cheung, said China continues to be "strongly supportive" of the city's government to govern the city amid the wave of unrest. "Some radical protesters have consistently escalated violence, including illegal assembly, blocking roads, throwing petrol bombs, setting fires and attacking citizens," Cheung "It's not only harming the social order, but also impacting on the rule of law in the city and citizens' safety, as well as weighing further on the economy, which has already seen downward pressure."

He also warned about the economic fallout from the protests, saying "trade relationships have turned complicated in recent months and are getting severe." Cheung reaffirmed Hong Kong's commitment to dialogue, days after Chief Executive Carrie Lam faced a barrage of questions about her government's handling of the unrest during her first town-hall-style dialogue session. Demonstrators light candles during a protest outside Prince Edward station on September 30.

Major malls throughout the city including the upscale mall at the International Financial Centre in Central were also closed for the day.

Riot cops guarded an early morning flag-raising ceremony at the Hong Kong Convention and Exhibition Centre in the center of the city amid worries that protesters would try and disrupt the event. Lam left the event to her number 2 official, chief secretary Cheung, after announcing that she would travel to Beijing for the festivities.

The MTR Corp. announced various subway closures on Hong Kong Island and in Kowloon ahead of the Oct. 1 protests. The transit company said its trains would not stop at the city's central Admiralty and Wan Chai stops or the Prince Edward station on the other side of the harbor.

Hong Kong tycoons Li Ka-shing and Peter Woo declined invitations to attend National Day celebrations in Beijing, because of "private reasons," the South China Morning Post newspaper reported, citing people familiar with the matter. The two billionaires had received the invitations before recent controversies about their stances on the protests in Hong Kong, the Post said.

(With assistance from Aaron Mc Nicholas and James Mayger.)