Nationwide, new locally transmitted infections climbed to 7,475 on November 7, according to China's health authority. Guangzhou accounted for nearly a third of the new infections. 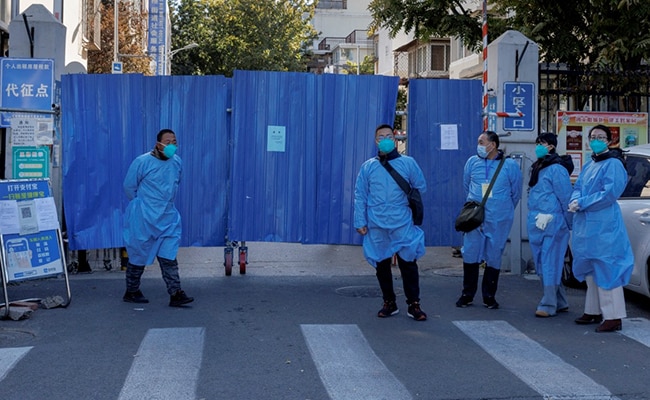 Nationwide, new locally transmitted infections climbed to 7,475 on Nov. 7, according to China's health authority, up from 5,496 the day before and the highest since May 1. Guangzhou accounted for nearly a third of the new infections.

The increase was modest by global standards but significant for China, where outbreaks are quickly tackled when they surface. Economically vital cities, including the capital Beijing, are demanding more PCR tests for residents and locking down neighbourhoods and even districts in some cases.

The sharp rebound will test China's ability to keep its COVID measures surgical and targeted, and challenge the expectations of investors that the world's second-largest economy could soon reopen its borders or even back off from its zero-tolerance approach.

The yuan weakened against the dollar and Chinese stocks slipped on Tuesday as the rising COVID case load eroded optimism about China's reopening its borders, shut to most visitors including tourists since 2020.

Guangzhou, capital of Guangdong province, reported 2,377 new local cases for Nov. 7, up from 1,971 the previous day. It was a dramatic jump from double-digit increases two weeks ago.

As cases surged, the sprawling southern city, dubbed the "factory floor of the world", surpassed the northern Inner Mongolia city of Hohhot as China's current COVID epicentre, in its most serious outbreak ever.

Many of Guangzhou's districts, including central Haizhu, have imposed varying levels of curbs and lockdowns. But, so far, Guangzhou has resisted a blanket lockdown like the one in Shanghai earlier this year.

Shanghai, currently not facing a COVID resurgence, went into a lockdown in April and May after reporting several thousand new infections daily in the last week of March.

"We have been working from home for the past couple of days," said Aaron Xu, who runs a company in Guangzhou.

"Only a few compounds have been locked up so far. Mostly we are seeing disruptions in the form of public transit services being suspended and compound security barring couriers and food delivery. And we have to do PCR tests every day."

Elsewhere in Guangdong province, the country's biggest air show kicked off on Tuesday in Zhuhai, with some attendees and delegates suddenly finding themselves blocked from the event due to COVID measures amid rising cases in the coastal city.

Zhengzhou, capital of central Henan province and a major production base for Apple supplier Foxconn, reported 733 new local cases for Nov. 7, more than doubling from a day earlier.

In Beijing, authorities detected 64 new local infections, a small uptick relative to Guangzhou and Zhengzhou, but enough to spark a new burst of PCR tests for many of its residents and a lockdown of more buildings and neighbourhoods.

"The lockdown situation has continued to deteriorate quickly across the country over the past week, with our in-house China COVID lockdown index rising to 12.2% of China's total GDP from 9.5% last Monday," Nomura wrote in a note on Monday.

"We continue to believe that, while Beijing may fine-tune some of its COVID measures in coming weeks, those fine-tuning measures could be more than offset by local officials' tightening of the zero-COVID strategy."

In the southwest metropolis of Chongqing, the city reported 281 new local cases, more than doubling from 120 a day earlier.

Chongqing officials have put new curbs on areas in at least four districts, closing some karaoke lounges, dance halls and entertainment venues, in a situation which a local official described as "complex and severe".

In the coal-producing region of Inner Mongolia, the city of Hohhot reported 1,760 new local cases for Nov. 7, trending higher from 1,013 a day earlier.