131 Dead In China Due To Coronavirus, 840 New Cases: Official

The new figures came as Japan airlifted about 200 of its nationals out of the city, and the US evacuated about 240 Americans by air. 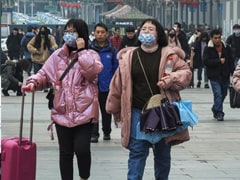 The number of confirmed deaths from China's viral outbreak has risen to 131, with authorities in central Hubei province on Wednesday reporting 25 new fatalities and 840 new cases.

The latest figures from hard-hit Hubei, the epicentre of the contagion, would put the nationwide total of confirmed infections at more than 5,300, based on figures previously released by the central government.

The new figures came as Japan airlifted about 200 of its nationals out of the city, and the US evacuated about 240 Americans by air.

More than 50 million people have been locked down in and around Wuhan, the central industrial city where the outbreak first began, in a bid by authorities to stop an infection that has since spread to other cities in China and to other countries.

France has also said it intends to fly its citizens out of the city in the coming days.

Chinese President Xi Jinping called the virus a "demon" during talks on Tuesday with the head of the World Health Organization in Beijing, and pledged a "timely" release of updates about the crisis.