The "Wall of the Disappeared" features interviews with camp survivors about alleged forced sterilisation. 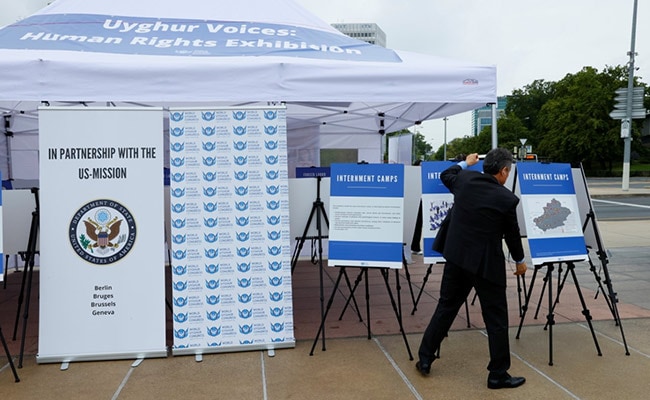 A U.S.-backed Uyghur photo exhibit of dozens of people who are missing or alleged to be held in camps in Xinjiang, China, opened in Switzerland on Thursday, prompting Beijing to issue a furious statement accusing Washington of "low political tricks".

The "Wall of the Disappeared" which also features interviews with camp survivors about alleged forced sterilisation, stands outside the United Nations in Geneva where a month-long session of the Human Rights Council opened this week.

"It was important for us to bring faces to represent the statistics," said Zumretay Arkin, whose uncle is featured in the exhibit. "It's easier to forget about numbers but if people see faces, we hope they will grasp the urgency of the situation."

Rights groups estimate one million Uyghurs and other ethnic minorities have been interned in camps that China describes as vocational training centres to combat religious extremism.

The United States gave a financial grant for the exhibit, which will later travel to Brussels and Berlin, the World Uyghur Congress told Reuters. Earlier this week, the U.S. mission in Geneva displayed it at a diplomatic reception, according to sources who attended.

"We are committed to placing human rights at the center of our China policy, and we will continue to highlight the grave human rights abuses we see the PRC committing across China, in Xinjiang, Tibet, Hong Kong, and elsewhere," a U.S. mission spokesperson said, referring to the People's Republic of China.

In a statement sent to journalists late on Thursday, China's diplomatic mission in Geneva said Washington was "trying to reap benefits from spreading disinformation about China. It has crossed the rudimentary moral line in bashing others."

"The U.S. is ... advised to act as a decent power and invest its resources in improving the welfare and human rights of the American people, rather than violating the human rights of people in other countries and playing low political tricks," it continued.

Exchanges between China and the United States have become increasingly barbed at the 47-member Council in Geneva this year, with China having regained a seat and Washington seeking election to the forum which former President Donald Trump quit.

This week, China's envoy Jiang Duan accused Washington of having committed "genocide" against Native Americans and of "systemic racism" in a sweeping speech.

"There is a difference between countries that have confronted immoral acts in the past, and sought to improve, and countries that are committing crimes against humanity in the present," the U.S. envoy Benjamin Moeling said in response.

The top U.N. rights official Michelle Bachelet this week raised Xinjiang in her opening speech, lamenting that efforts to gain access to investigate reports of serious violations against Muslim Uyghurs had not succeeded.