Peggy LaBossiere, 51, and Rachel Hilaire, 40, of East Bridgewater, Massachusetts - bound the 5-year-old's feet together and tied her hands to a long stick over her head, preventing her from resisting the voodoo ritual that followed. 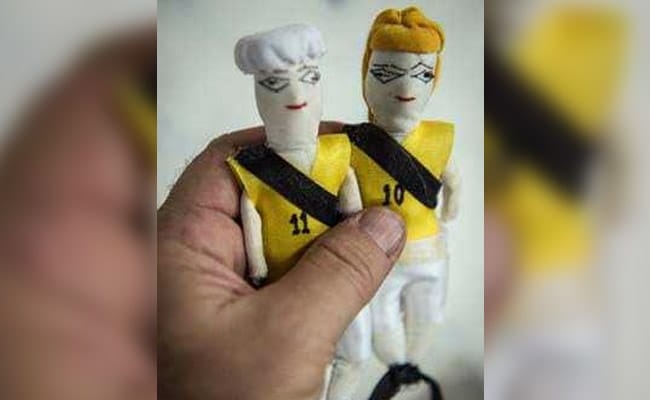 The relatives of the girl said there was a 'demon' inside her and it needed to come out. (File photo)

Washington: The cause of the girl's misbehavior was obvious, the women said. There was a demon inside her, and it needed to come out. It would not do so willingly.

So the women - Peggy LaBossiere, 51, and Rachel Hilaire, 40, of East Bridgewater, Massachusetts - bound the 5-year-old's feet together and tied her hands to a long stick over her head, preventing her from resisting the voodoo ritual that followed, according to a police report obtained by the Enterprise, a Brockton, Massachusetts, newspaper. Then LaBossiere kissed the girl "all around her face like a snake," the report said, then used "a pointy object like a needle" to cut the girl on her arm and around her collar, drawing blood.

Then came the burning.

LaBossiere blew flames from a burning stick over the girl's face. She also put oils and at least one caustic chemical on the girl's head and in her eyes, causing a burn that doctors say will cause permanent disfigurement, the police report said.

LaBossiere also allegedly worked voodoo on the girl's 8-year-old brother. When he resisted, she threatened to cut his head off with a machete, police said, according to the Associated Press. LaBossiere made him undress and rubbed his entire body with a "plant-like substance and blew fire on him."

It's unclear what caused the police in East Bridgewater, about 25 miles south of Boston, to ultimately intervene, but when they arrived, both children smelled of smoke, the AP said. They were taken to a hospital.

LaBossiere and Hilaire are both charged with assault after being arrested in mid-January. Hilaire is accused of aiding in the ritual by holding the children down.

The children's mother, a hairdresser who has LaBossiere as a client, was not charged, although she was taken to a mental hospital for evaluation. The children were taken into custody by child welfare authorities, police told the AP.

All the people involved are of Haitian descent, including the children's mother. The public defender for LaBossiere and Hilaire could not immediately be reached for comment.

The siblings had been told they were going to LaBossiere's house for a sleepover.

According to the AP, the women told authorities they've performed "cleansing baths" for friends and family for years. During such practices, they chant prayers and rub eucalyptus oils, frankincense, myrrh and sea salt on people's bodies.

Burns are a part of the rituals, the sisters told authorities, saying they happen as evil spirits are leaving the body.

Hilaire and LaBossiere remain jailed. They have another hearing Wednesday, which will determine if they will be a danger to the public if released.

Long a popular horror movie trope, voodoo is an Afro-Caribbean religion that originated in Haiti but is practiced in many countries in the Western Hemisphere.

It started with slaves who combined aspects of their West African traditions with the Catholicism they were forced to adopt by their masters, according to Live Science.

As The Washington Post's Sarah Kaplan wrote in 2015:

"The faith ... is revered for its role in Haitian's successful struggle for independence from French rule. Like Christianity, voodoo has one God, but in practice the religion bears much more resemblance to the traditions of the West African slaves who founded it: Spells are cast, animals are sacrificed, one of the religion's 401 spirits are invited to possess followers at raucous, colorful ceremonies."

But aspects of the religion have been appropriated and distorted for horror movies or to sell voodoo dolls, potions and broomsticks to tourists.

In 2015, The Post's Karen Tumulty reported that former president Bill Clinton had written about a day he and Hillary Clinton saw voodoo in practice near Port-au-Prince, Haiti's capital.

The priest gave the visitors what Clinton described as a "brief course in voodoo theology," and then the late-afternoon ceremony began.

"After several minutes of rhythmic dancing to pounding drums, the spirits arrived, seizing a woman and a man," Bill Clinton wrote. "The man proceeded to rub a burning torch all over his body and walk on hot coals without being burned.

"The woman, in a frenzy, screamed repeatedly, then grabbed a live chicken and bit its head off. Then the spirits left and those who had been possessed fell to the ground."


(This story has not been edited by NDTV staff and is auto-generated from a syndicated feed.)
Comments
VoodooChild