"Cheetah's On Holiday": Dog Inside Big Cat Enclosure At US Zoo Surprises Internet

The Turtle Back Zoo in New Jersey is home to more than 200 species of animals, but in 2020, added another animal to their residents - Bowie the dog. 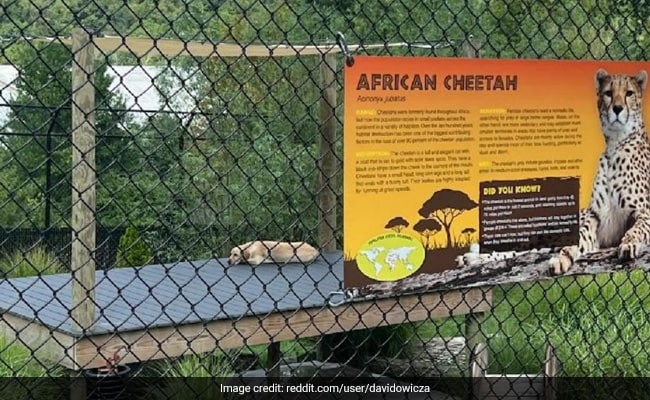 Reddit photo shows a labrador chilling inside the cheetah enclosure at US zoo.

A man in New Jersey, in the United States, went to a zoo and was dumbfounded after spotting a dog inside a cheetah enclosure. He posted the photo of the bizarre encounter on Reddit, where it has gone viral. Davidowicza, who shared the post, said he visited the zoo with hopes of seeing a big cat but was "99 per cent sure that's not a cheetah". The photo, posted five days ago, has received more than one lakh upvotes on Reddit.

The user told Newsweek, "We all laughed when we got close enough to see it was just a happy lab."

The Turtle Back Zoo in west Orange is home to more than 200 species of animals, but in 2020, it added another animal to their residents - Bowie the dog.

The labrador is seen taking a nap out in the open, while sitting inside the enclosure. The photo gave Reddit users a chance to post jokes related to the situation.

"When you lie on your resume, but you are an excellent liar," one user commented. Another added: "...or an excellent cheater."

"It's a stand-in. The cheetah's on holiday in Africa," one of the comments read, while a Redditor said: "Man, its camouflage is crazy good!"

However, some people recognised the dog and said the cheetah will be inside with it.

Davidowicza, whose post started the discussion on Reddit, said: "It was still funny approaching from a distance and being like 'That's one odd looking chubby cheetah'."

Newsweek said in its report that Bowie shares a cage with feline companion Nandi, an African Cheetah that's used for appearances at events to educate the public on conservation efforts for big cats.