Charlie Hebdo Attack: The 12 Who Died 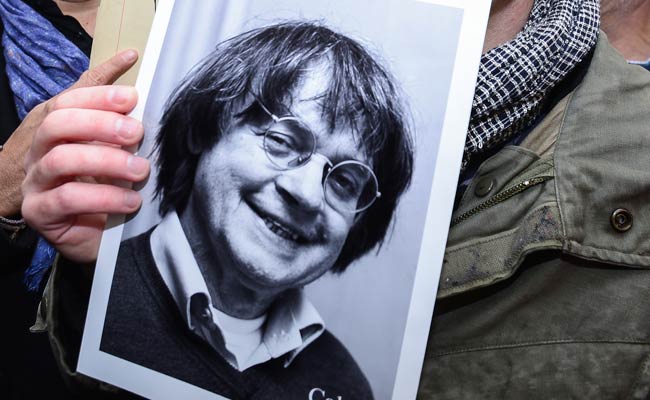 Belgian cartoonists Pierre Kroll and Frederic Dubus pose with a drawing and a portrait of slain French cartoonist Cabu.

Paris: Twelve people were killed in Wednesday's jihadist attack on the French satirical magazine Charlie Hebdo -- five cartoonists, three contributors, a guest at the magazine's editorial conference and a maintenance worker. Two policemen also died, one officer protecting the magazine's editor and another shot as the gunmen fled. (Two Brothers Suspected in Killings Were Known to French Intelligence Services)

A tireless pricker of political pomposity for more than half a century, the magazine's star cartoonist was something of a French national treasure. He lampooned not just the high of French society but also the low, coining a whole new social type when he created the "beauf" -- the quintessential complaining and contradictory racist Frenchman, likely to be a member of a communist union while voting for the anti-immigration National Front. (French Police Converge on Village After Paris Attack Suspects Seen)

With his perennial pudding bowl haircut, trademark round glasses and love of jazz, he was a father figure for two generations of comic-obsessed French teenagers and adults.

But despite official adulation that included a major retrospective of his work in Paris in 2007, he never lost his edge nor his anger. He drew several of the Mohammad cartoons published by the magazine in 2006 that first drew death threats from radical Islamists. (How the Terror Attack Unfolded at Charlie Hebdo's Office)

His son, the singer and poet Mano Solo, died tragically in 2010.

"I prefer to die standing than to die on my knees," the editor of Charlie Hebdo, who knew he figured on an Al Qaeda death list, once famously said.

It was to prove horribly prophetic.

Utterly fearless, Charb said his only weapon was his pen. "Though I don't think you can cut someone's throat with a crayon," he told Le Monde in 2012.

He began early as a cartoonist, with a quick-fire sketch style as thick as his jam-jar glasses. Nothing was sacred -- politicians, reality TV stars, religion, even the sick felt the edge of his acid wit.

He had a reputation for never pulling back from a good joke, whether in bad taste or not.

The oldest of the victims had by his own admission the most juvenile sense of humour. Sex-obsessed and utterly irreverant, Wolinski, was a mythic figure for a 1960s generation of newspaper and magazines readers, who first came across his outrageous strips in Hara-Kiri, where many of the cartoonists who went on to found Charlie Hebdo cut their satirical teeth.
Born in Tunisia to a Italian mother and Polish Jewish father, he got his first taste of cartoons from comics begged from American GIs during World War II.

Unabashedly sexist and politically incorrect, this bon vivant had some 60 albums to his name, and also did a famous weekly strip for the mass-circulation Paris Match.

According to Le Monde, he once told his wife that he wanted to be "cremated and my ashes flushed down the toilet so I will see your backside every day."

Honore began developing his self-consciously old-fashioned style at 16, and worked for many of the big names of the French press and publishing during his long career.

He had worked at Charlie Hebdo since 1992, and illustrated a special anniversary issue of the famous French dictionary the Petit Larousse in 2010.

Caricaturist and author of several highly-political graphic novels, Tignous traced the folly of the world with the despairing air of a disappointed idealist.

His work appeared regularly in Charlie Hebdo and the French left-wing weekly magazine Marianne, and he often popped up on French political TV shows to cartoon live on air.
His graphic novels condemned the madness of capitalism, social inequality and defended a Corsican nationalist wanted by French police. But it was his book "Pandas in the Mist" (2010) which comes closest to his spirit, giving voice to bumbling pacifist animals threatened with extinction.

A left-wing iconoclast economist, Bernard Maris was known not just for his intellectual rigour but his gift for demystifying and explaining often complicated economic concepts.

A regular on TV and radio, he not only wrote a satirical weekly column for the magazine, "Uncle Bernard", but was one of its shareholders and financial backers.

His series of economic "anti-manuals" were a big hit in the early 2000s and since then he has railed against the doctrine of growth and excesses of the consumer society.

The only woman killed was a psychiatrist, who wrote regularly on social issues for the Charlie Divan column.

An Algerian-born orphan and voracious autodidact, he was the magazine's proof-reader.

Founder of travel writing festival in Clermont-Ferrand in central France, he had been invited to attend the magazine's weekly editorial conference when the attack happened.

Maintenance worker and father-of-two was shot in the entrance hall of the building which housed the magazine's offices.

Promoted
Listen to the latest songs, only on JioSaavn.com
The police officer assigned to protect Charb, who had received numerous death threats, leaves two children.

Local policeman murdered by the attackers as they fled the scene. Horrific images of his death, with the gunmen going back to shoot him in the head after he fell wounded on a pavement, were filmed by onlookers.