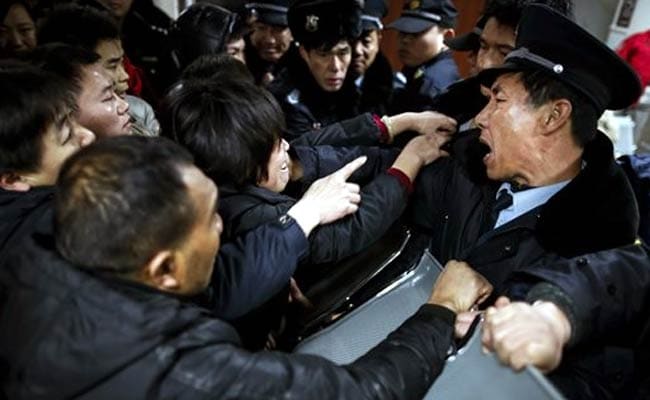 Shanghai: Shanghai's joyful New Year celebration ended in screams, panic and chaos as a stampede enveloped a crowd of revellers so dense that emergency services were initially prevented from helping.

American Andrew Shainker, who teaches English in the city, spent New Year's Eve on a restaurant terrace overlooking the pandemonium centred on a stairway leading up to the Bund, a riverfront promenade.

It "looked from above as if people were getting crushed as more and more people came from all directions", Shainker wrote on Chinese messaging service WeChat. Mayhem ensued.

"There was a large flow of visitors, some trying to reach the viewing deck and some trying to get down," Zhou Miaochen, another witness, told AFP. "People started crashing into each other."

Confusion reigned and a video seen by AFP showed a handful of police officers trying to subdue a surging, densely-packed crowd of tens of thousands, to no avail.

"People were screaming, women were screaming and people starting jumping off the staircase to get clear," said a Shanghai resident who gave her name only as Sarah.

"There was a quiet, and then people on the stairs fell in a wave and people started to get trampled."

The official Xinhua news agency quoted a woman surnamed Yin saying: "We were caught in the middle and saw some girls falling while screaming.

Then people started to fall down, row by row." She used her arms to try to protect two children in front of her and her son followed her out, Xinhua said.

When he emerged, she said tearfully, he was bruised, cut on the neck and bleeding from the nose and mouth.

As the screams pierced the festive atmosphere, Sarah -- who is Singaporean -- said she saw police desperately trying to get the situation under control, yelling into walkie talkies.

Officers tried fruitlessly to resuscitate a lifeless body, Sarah said as she choked back tears, saying it was the first corpse she had ever seen.

Some, including foreigners, rushed to pull people to safety and perform emergency resuscitation, Shainker said.

"I witnessed lifeless bodies being carried out of a crowd one by one and dumped on the street. Each body had around 4 people carrying it," he wrote on WeChat, adding most of the victims appeared to be Chinese.

"They tried their best to create a ring of protection around the bodies."

But many people, he added, "stood or walked by and did not want to be responsible".

Two ambulances arrived after about 30 minutes but were overwhelmed by the sheer number of dead and injured, he said.

"It was impossible for emergency services to get in there given the people and chaos," Shainker, 28, told AFP.

Promoted
Listen to the latest songs, only on JioSaavn.com
At least 36 people were killed and 47 injured, according to city officials.

"What I thought was the best view on the Bund ended up being a front row seat to an international tragedy," Shainker wrote in his posting.
Comments
new year celebrationShanghaiShanghai stampedestampede on new year eveNew Year's DayNew Year's EveAndrew Shainker