Centipedes Eat Animals 15 Times Their Size Thanks To This Powerful Toxin, Study Finds

Researchers in Venezuela have seen centipedes skitter up cave walls to eat much heavier bats. 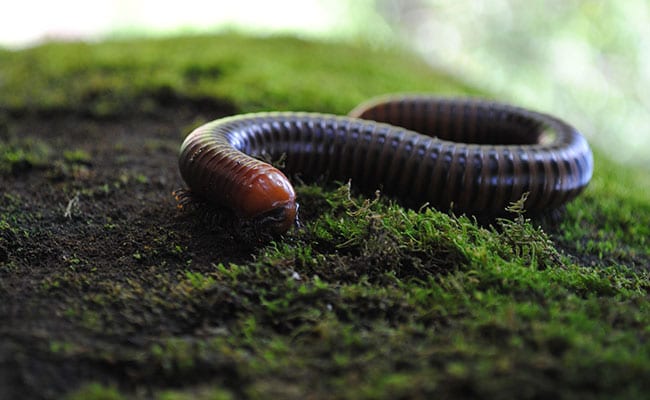 A bite from a venomous centipede can cause swelling and excruciating pain. And for a mouse - even one 15 times larger than a centipede - the bite can be deadly.

Most predators hunt smaller animals. Blue whales, the largest carnivores on earth, are an extreme example: Each day a whale swallows millions and millions of crustaceans called krill that are about the size of an aspirin tablet. Centipedes, though, do not abide by this rule.

Researchers in Venezuela have seen centipedes skitter up cave walls to eat much heavier bats. And scientists studying centipedes in China observed a golden head centipede, weighing three grams, as it defeated a 45-gram mouse. The centipede quickly subdued its much larger prey thanks to an unusual and potent venom.

"Comparison is difficult to establish among venomous animals because of their preying habit," said Shilong Yang, an expert in venom and toxins at the Kunming Institute of Zoology in China. But, to Yang's knowledge, the centipede holds a record by capturing prey 15 times its body weight within 30 seconds.

Yang and his co-authors, in a report published Monday in the Proceedings of the National Academy of Sciences, identified the toxin that gives centipedes this deadly ability. They isolated a molecule in centipede venom, a peptide, which they named Ssm Spooky Toxin. (The golden head centipede, also known as the Chinese red-headed centipede, has the scientific name Scolopendra subspinipes mutilans, hence Ssm.) The toxin blocks the movement of potassium into and out of mammal cells.

Healthy cells can push potassium ions through their membranes. Cells in airways, for instance, need this flow of potassium ions to control muscle contractions and keep a mouse breathing. Ssm Spooky Toxin halts this flow like an overzealous traffic cop.

Because potassium channels exist throughout the body, "centipedes' venom has evolved to simultaneously disrupt cardiovascular, respiratory, muscular and nervous systems," Yang said. "This molecular strategy has not been found in other venomous animals." The study authors hypothesize that the toxin halts blood flow to the heart, leading to heart failure and ultimately death.

This research suggests that a drug called retigabine might neutralize the centipede toxin, Yang said. Retigabine, an anticonvulsant used to treat epilepsy, opens the potassium channels that the centipede toxin blocks. (In June 2017, pharmaceutical company GlaxoSmithKline announced it would discontinue the production of retigabine, citing low demand among patients with epilepsy.) In lab tests, retigabine inhibited the effects of centipede venom in monkeys; equivalent human data does not exist.

Human deaths from centipedes appear to be exceedingly rare. As of 2006, physicians reported in the Emergency Medicine Journal, there were only three recorded cases of people who had died of centipede venom.

Promoted
Listen to the latest songs, only on JioSaavn.com
The bites do not need to be fatal to be mightily unpleasant. In Hawaii, centipedes have been known to send victims to emergency clinics. Between 2007 and 2011, for Hawaiian emergency visits classified as having natural causes, centipedes were responsible for 1 in 10 cases, on a par with bee and wasp stings.

(This story has not been edited by NDTV staff and is auto-generated from a syndicated feed.)
Comments
Centipedesvenomous centipedeRetigabine