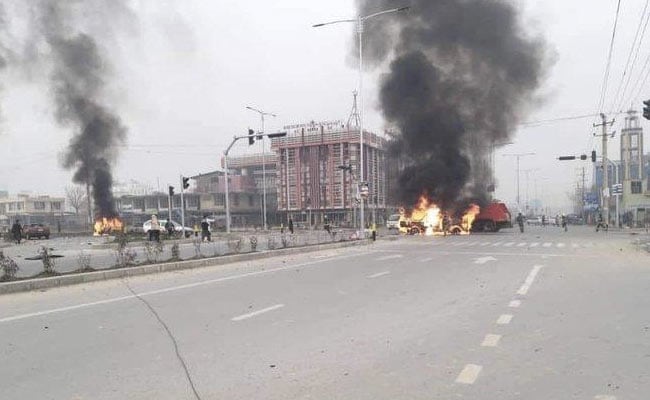 A security source said the car bomb detonated in the west of the capital.

A car bomb killed eight people and wounded more than 15 others in Kabul Sunday, officials said, the latest attack to rock the Afghan capital.

Kabul has been hit by a wave of deadly violence in recent months despite the Taliban and government engaging in peace talks to end the country's long conflict.

A security source said the car bomb detonated in the west of the capital, and a health ministry official also confirmed the blast.

"It was a powerful explosion that has caused a lot of damage to houses in the vicinity," the source said.

Television footage showed at least two cars on fire, with plumes of thick black smoke billowing into the sky.

No group has so far claimed responsibility.

The jihadist Islamic State has claimed responsibility for some of the recent attacks in the capital.

Dozens of people, mostly students, were killed when IS jihadists attacked two education centres, including one at Kabul University that saw gunmen open fire on classrooms.

The group has also claimed a series of recent rocket attacks.

On Saturday five rockets were fired at Bagram Airfield, a major US airbase north of Kabul, but there were no casualties.

That attack was also claimed by IS.

Sunday's car bomb comes just two days after 15 children were killed and many more wounded when a motorbike laden with explosives blew up near a religious gathering in a remote part of Ghazni, officials said, blaming the Taliban.

The children had gathered to recite Koranic verses, a regular activity on the Islamic holy day of Friday.

The Taliban denied involvement and said the blast occurred when "unexploded ordnance" detonated near the children.

Violence has surged across several provinces in Afghanistan this year.

Between January and September more than 2,100 civilians were killed and more than 3,800 wounded, according to the UN mission in Afghanistan.

Peace talks -- which opened in September in the Qatari capital of Doha -- are currently on a break until early January.

Afghan President Ashraf Ghani has called for the next round of negotiations to be held at home.

Outgoing US President Donald Trump has pushed to end America's longest war, with Washington signing a deal with the Taliban earlier this year committing to pulling all of its troops from the country by May 2021.