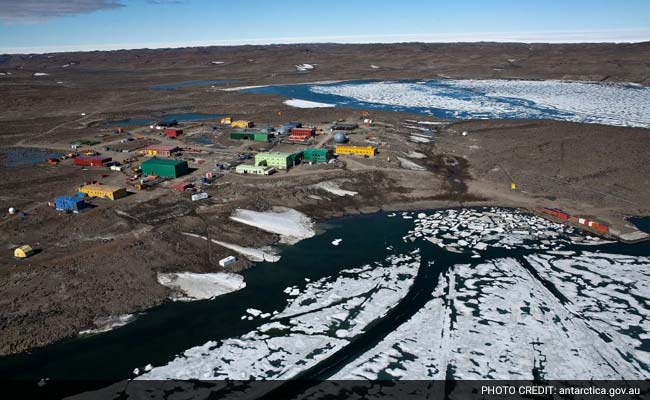 Davis Station is the southernmost of Australia's three Antarctic stations, which also include Casey and Mawson, along with a sub-Antarctic station at Macquarie Island. (Photo: David Barringhaus)

Sydney: A Canadian helicopter pilot was in critical condition today after plunging 20 metres (66 feet) down a crevasse after he landed on a remote ice shelf in Antarctica, Australian officials said.

David Wood, 62, who was winched out of the deep crack by specialist officers from a nearby Australian scientific research station in a "difficult" rescue, fell in about 4pm local time (0900 GMT) after stepping out of his helicopter on the West Ice Shelf at a fuel depot site.

Wood had flown to the remote site some 90 nautical miles northeast of Australia's Davis station as part of a routine operation to drop off fuel, the Australian Antarctic Division said, adding that he had "considerable Antarctic experience".

Another pilot, who was in a separate helicopter and unable to help, flew back to Davis station -- about a 45 minute flight away -- and returned with three specialist officers, one of whom entered the crevasse and winched the injured man out, the Division's director Nick Gales told reporters in Tasmania.

Gales said the West Ice Shelf was a very remote part of the eastern Antarctic region, with general working conditions on the frozen continent "always very dangerous and especially in the remote field".

"The pilot is in a critical condition, having been transported back to Davis Station," Gales said, adding that Wood, who is employed by a helicopter firm working with the Australia's Antarctic programme, was in the crevasse for two hours before being rescued.

Officials were assessing their options for evacuating the pilot, with Wilkins Aerodrome near another of Australia's stations, ready for use from Wednesday afternoon.

The journey to Australia could take 24 hours, Gales added. He did not release details about Wood's injuries.

"We've contacted several other national Antarctic programmes to assess how and if they may be able to assist us... we're preparing our runway at Wilkins near Casey station at the moment and we're looking at other options as well."

About 30 nations operate permanent research stations in Antarctica including the US, Russia, Australia, Britain, France and Argentina.