Canadian Citizen Sentenced To Death In China For Drug Trafficking

The sentence comes against the backdrop of the Chinese government's anger over the arrest of a top executive from telecom giant Huawei in Canada. 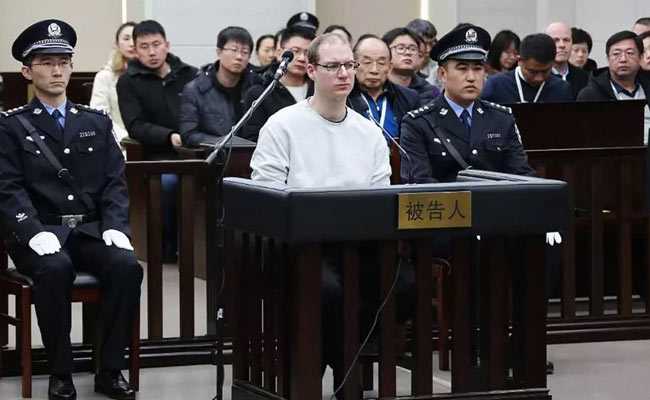 Robert Lloyd Schellenberg, 36, had earlier been sentenced to 15 years in prison.

A Chinese court sentenced a Canadian man to death on drug trafficking charges on Monday after his previous 15-year prison sentence was deemed too lenient, a ruling that has deepened a diplomatic rift between Ottawa and Beijing.

Robert Lloyd Schellenberg, 36, nodded as the judge in the northeast city of Dalian asked him whether he understood the verdict, following a day-long retrial in which he declared his innocence.

He can appeal against the sentence in an upper court.

The sentence comes against the backdrop of the Chinese government's anger over the arrest in Canada of a top executive from telecom giant Huawei last month on a US extradition request related to Iran sanctions violations.

Chinese authorities later detained two Canadian nationals -- a former diplomat and a business consultant -- on suspicion of endangering national security, a move seen as retaliation over the Huawei executive's arrest.

Schellenberg had originally been sentenced to 15 years in prison and a 150,000-yuan ($22,000) forfeiture in November. But following an appeal, a high court in Liaoning ruled in December that the sentence was too lenient given the severity of his crimes.

"I am not a drug smuggler. I came to China as a tourist," Schellenberg, said in his final statement before the sentence was announced.

The Dalian court said Schellenberg, who was detained in December 2014, played a "key part" in an international drug trafficking syndicate.

"The court completely rejects the accused person's explanation and defence because it is completely at odds with the facts," the chief judge said in a courtroom packed with observers -- among them Canadian embassy officials and three foreign reporters, including one from AFP.

"This syndicate... does not just spread drugs in one country, the problem has spread across borders... it is a harm to human health and also to the stability of countries," the court said.

China has executed other foreigners for drug-related crimes in the past, including a Japanese national in 2014, a Filipina in 2013 and a Briton in 2009.

Experts said retrials are rare in China, especially ones calling for a harsher sentence, but rights groups noted that courts are not independent and can be influenced by the Communist Party.

"Many factors in this case raise serious questions of concern: particularly, that the retrial was rushed through so quickly and that state-run media drew such deliberate attention to the case," William Nee, China researcher at Amnesty International, told AFP.

"Most likely, China wants to send a tough message to Canada," Nee added.

Beijing has repeatedly denied any links to Canada's arrest of the Huawei executive.

The Chinese foreign ministry said Friday critics "can stop recklessly suspecting others of politicising legal issues just because they have done so".

No coins in court

The Dalian court was filled with about 70 observers, who were patted down and made to empty pockets -- receipts and stray coins were to be left at the security check.

Brought into court in handcuffs, a bespectacled Schellenberg, whose hair had been cut short, was dressed in a white sweater and black trousers.

In an opening statement, Schellenberg said he had come to China after travelling through Southeast Asia, including Laos, Myanmar, Malaysia, Singapore and Thailand.

He said a friend recommended a man named Xu Qing as a translator and he was swept up in what has turned out to be an international drug trafficking syndicate.

"This is a case about about a man named King (Xu Qing), he is an international drug smuggler and a liar," Schellenberg told the court, accusing Xu of setting him up.

Schellenberg claimed the drug deal was masterminded by Khamla Wong, a Canadian who was arrested in Thailand in 2016 on drug charges.

But Chinese prosecutors said Schellenberg was the principal suspect in a case involving an international syndicate that planned to send some 222 kilogrammes (490 pounds) of methamphetamine to Australia.

Prosecutors brought in Xu as a witness, who in almost two hours of testimony never once turned to look at Schellenberg.

When pressed on details, he frequently said he could not remember and had to refer to a written statement, including when Schellenberg questioned him about 180,000 yuan he was purportedly given.

Two other Chinese men have been involved in this case -- one was sentenced to life imprisonment, another handed a suspended death sentence.

(Except for the headline, this story has not been edited by NDTV staff and is published from a syndicated feed.)
Comments
drug traffickingCanadian citizen