Canada Truckers' Protest: Tamara Lich, one of the organizers of the so-called "Freedom Convoy," did not resist as she was taken into police custody. 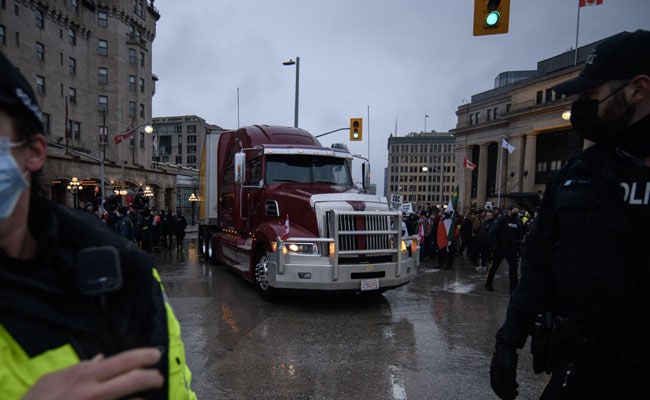 Canada Protests: Tamara Lich, one of the organizers of the "Freedom Convoy", was arrested.

Canadian police on Thursday began arresting leaders of the trucker-led protest that has choked the capital's streets for three weeks and provoked the government into calling on rarely used emergency powers.

A video posted to the Twitter account for the so-called "Freedom Convoy" showed Tamara Lich, one of the organizers, being taken into police custody on Thursday night.

The earlier arrest of another leader, Chris Barber, was also captured in a video shared on the same account.

The convoy had started with truckers protesting against mandatory Covid vaccines to cross the US border, but its demands have grown to include an end to all pandemic restrictions and, for many, a wider anti-establishment agenda.

At its peak, the movement also included blockades of a half-dozen US-Canada border crossings -- including the key route between Windsor, Ontario and Detroit, Michigan.

Earlier on Thursday, Lich posted a tearful video to say she was expecting to be arrested.

She called on supporters to flood the capital, saying truckers already in place "are gonna stay and fight for your freedom."

"If you can come to Ottawa and stand with us, that would be fantastic," she said.

But city police chief Steve Bell said access to downtown Ottawa would be restricted to prevent people joining the demonstration, and he warned of "imminent" action against those already there.

"I implore anyone that's there: Get in your truck... and leave our city streets," Bell told reporters.

'They have to stop'

Criticized for failing to act decisively, Prime Minister Justin Trudeau this week invoked the Emergencies Act, which gives the government sweeping powers to deal with a major crisis.

It is only the second time such powers have been invoked in peacetime.

Police were deployed in force into the area around the Canadian parliament, where hundreds of big rigs remained parked.

"We've begun to harden the perimeter around the protests," Bell said.

"What I can tell you is this weekend will look very different than the past three weekends."

Trudeau defended his decision to resort to the Emergencies Act, saying the act was not being used to call in the military, and denied restricting freedom of expression.

The objective was simply to "deal with the current threat and to get the situation fully under control," he told the House of Commons.

"Illegal blockades and occupations are not peaceful protests... They have to stop," he said.

The demonstrators had been given an ultimatum late Wednesday by Bell to leave or risk arrest and truck seizures.

In a statement, he pledged "to take back the entirety of the downtown core and every occupied space," while warning that "some of the techniques we are lawfully able and prepared to use are not what we are used to seeing in Ottawa."

Emergency powers have been invoked in Canada only once before, in 1970 by Trudeau's father, former prime minister Pierre Trudeau, to crush Quebec separatists who had kidnapped two officials and set off bombs in Montreal.

Officials had announced Wednesday a negotiated peaceful end to the last of the border blockades, which Mendicino said had cost the economy billions of dollars.

In documents filed to the Commons, the government laid out its rationale for invoking the Emergencies Act, saying the trucker convoy has created a critical and urgent situation that cannot be dealt with under any other Canadian laws.

It cited "a risk of serious violence and the potential for lone actor attackers to conduct terrorism attacks."

In a letter to provincial premiers, Trudeau decried the protests as "a threat to our democracy."

Police this week arrested dozens of protesters, including four people charged with conspiracy to murder police officers at a checkpoint between Coutts, Alberta and Sweet Grass, Montana.

They also seized dozens of vehicles, as well as a cache of weapons that included rifles, handguns, body armor and ammunition.

Authorities have also moved to freeze bank accounts, and choke off crowdfunding and cryptocurrency transactions supporting the protesters.