Can Elephant Be Considered A Person? US Court Hears Unique Case

Lawyers representing Happy the elephant say that is an autonomous and cognitively complex animal entitled to the same rights as people. 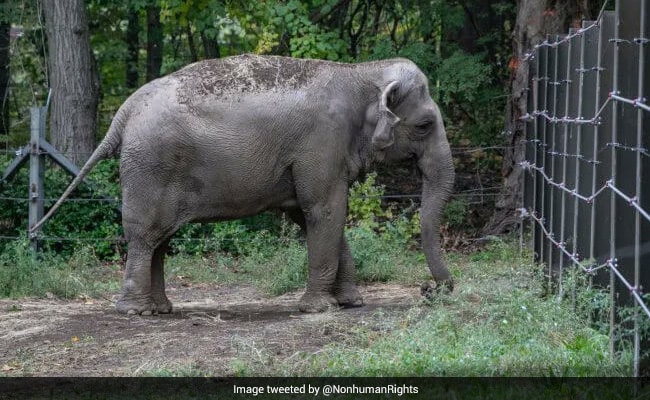 Happy the elephant in Bronx Zoo.

A court in New York is hearing a case asking for an elephant to be considered a legal person. It has been filed by animal rights organisation Nonhuman Rights Project, which has said that 51-year-old Asian elephant Happy has been detained unlawfully at the Bronx Zoo and should be sent to an elephant sanctuary, according to The Washington Post.

The animal rights group has filed a habeas corpus petition, which is typically used to determine whether a person's detention is lawful.

The decision depends on whether Court of Appeals, New York's highest court, considers Happy a person.

“The elephant is being imprisoned against her will,” said lawyer Steven Wise, who is representing Happy, was quoted as saying by The Wall Street Journal.  “For more than 40 years she has been kept as a prisoner.”

Nonhuman Rights Project said that Happy "is an autonomous and cognitively complex animal entitled to the same right of protection against unlawful imprisonment that people have".

But the zoo argues that Happy is well cared-for and her detention is not illegal.

The self-appointed human lawyers of Happy, however, contend that Happy is so intelligent that she has a right to bodily liberty. They cited a mirror self-recognition test Happy passed in 2005, which indicates that she is aware of herself.

They also claim that the elephant, in reality, is not happy in captivity and should be moved out from the zoo, where Happy has lived since 1977, to an elephant sanctuary where she would have more space and can interact with other elephants.

Happy has spent 16 yrs in isolation at the Bronx Zoo: 2x longer than Kaavan, the “world's loneliest elephant” before a Pakistan judge freed him from a zoo to a sanctuary. In his decision, he rightly called Happy an inmate. #FreeHappyhttps://t.co/YX9Mv22CHSpic.twitter.com/eHXZ5K0z4r

Happy is not the only animal fighting for their legal rights. Nonhuman Rights Project has represented whales, chimpanzees and dolphins who they argue have the complex cognitive abilities and autonomy to merit legal personhood.

Since launching Happy's case in 2018, the organization has lost in several lower-level courts. An online petition has also been launched on change.org, to encourage Bronx Zoo Director James J Breheny to end Happy's solitary confinement.

Till the Court of Appeals rules in the case, Happy will continue to live in the Bronx Zoo.