A dozen camels were banned from a beauty contest during the King Abdulaziz Camel Festival in Saudi Arabia after they were given Botox injections, according to the National, a newspaper based in Abu Dhabi, United Arab Emirates. 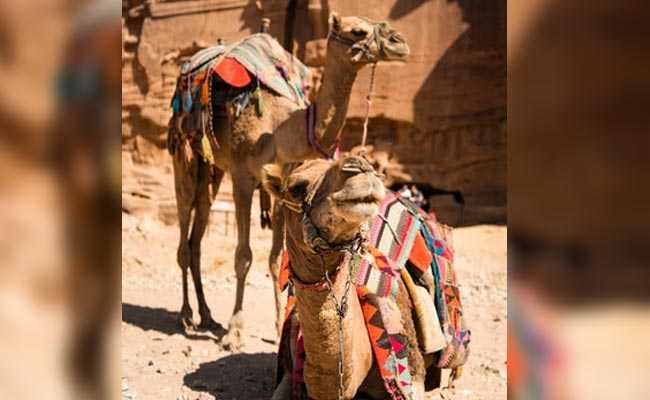 Some 30,000 camels were brought to the annual event in Al Dhana. (Representational)

Batty eyelashes, pouty lips and perfectly placed humps - not all camels are blessed with such good looks. Enter cosmetic enhancements.

A dozen camels were banned from a beauty contest during the King Abdulaziz Camel Festival in Saudi Arabia after they were given Botox injections, according to the National, a newspaper based in Abu Dhabi, United Arab Emirates.

Some 30,000 camels were brought to the annual event in Al Dhana, near Riyadh, for racing, an obedience competition and a beauty pageant.

The National reported that prize money totals $57 million, with $31.8 million reserved for "pageantry." But some people apparently tried to cheat the system - enhancing the animals' natural beauty.

"They use Botox for the lips, the nose, the upper lips, the lower lips and even the jaw," Ali Al Mazrouei, the son of a top Emirati breeder, told the newspaper. "It makes the head more inflated so when the camel comes it's like, 'Oh look at how big is that head is. It has big lips, a big nose.'"

The King Abdulaziz Camel Festival's website has a section explaining the "standards of camel beauty."

Leading up to the festival, which runs through January, Saudi media reported that a veterinarian was caught performing cosmetic surgery on camels - giving them Botox and making their ears smaller, according to the National.

Ali Obaid, a pageant guide, told the National that cheaters may even "pull the lips of the camel."

"They pull it by hand like this every day to make it longer," he told the newspaper. "Secondly, they use hormones to make it more muscular and Botox makes the head bigger and bigger. Everyone wants to be a winner."

Others may lather them with oil to make their coats appear darker, according to the National.

The National reported that judges at the King Abdulaziz Camel Festival do take steps to guard against cheating: "The age of a camel is measured by its teeth, camels must be microchipped to compete and some competitions require blood testing. At Al Dhafra, competing camels are obliged to overnight at judging pens on the eve of competitions. Owners still douse humps with hairspray and give camels a fine combing to give that fluff on the hump extra volume but after a night at the pens, the pampering makes little difference. Misty mornings in the desert wreak havoc on hair and by the time of the judging, prospective champions will only have their God-given beauty.

"If all else fails there is a time-honoured safeguard. Before winners are announced, owners must swear on the Quran about a camel's age and ownership. Whatever tactics employed to con judges, owners are reminded that while breeders may be judging the camels, God is judging them. This, in the end, does the trick."

And according to the festival's website, "In case of fraud to change the natural form of participating camels, the participant shall be excluded immediately, with the offender being deprived of participation in this session and at least next five sessions of the Festival, based on the report of the Special Committee. He will be referred to the concerned authorities to take the legal penalties against him according to the GCC Animal Welfare Act approved by the Royal Decree No. 44 of 26/7/1434 AH."

Promoted
Listen to the latest songs, only on JioSaavn.com
"The people who are just in the camel competition to make it more valuable," Al Mazourei told the newspaper, "they are cheating everyone."

Committed To Stable, Constructive Relationship With China: US Defence Chief