Buzz Aldrin Is Suing His Children. They Say They're Trying To Protect Him

Buzz Aldrin, 88, the second man to walk on the moon, who famously described its "magnificence desolation," took the action by his children Jan Aldrin, Andy Aldrin as an affront. 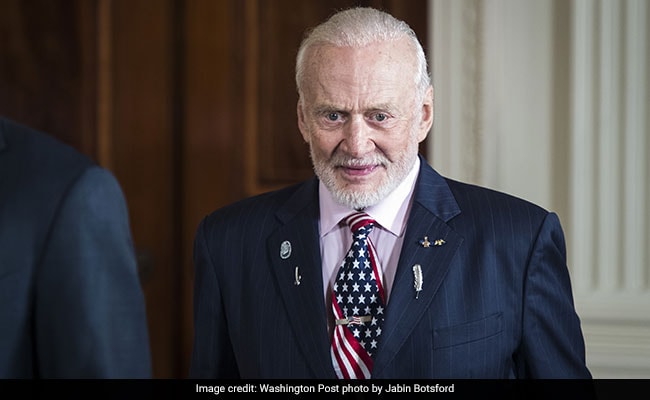 Buzz Aldrin, 88, the second man to walk on the moon, famously described its "magnificence desolation"

Two of Buzz Aldrin's children were worried about him. The world-famous astronaut was getting older, showing "increased confusion and memory loss," Andy and Jan Aldrin, his son and daughter, said in a statement. And so they sought to protect him from the "debilitating effects of his worsening condition," they said, seeking a court order that would install them as guardians, able to oversee his finances and fend off outsiders seeking to profit off his name and image.

Instead, Aldrin, 88, the second man to walk on the moon, who famously described its "magnificence desolation," took the action as an affront.

"It's hard to hard to have your children file a legal document that says you're crazy," his attorney Robert Bauer said. "You can't take that lying down. You have to respond when someone is saying you're doing things wrong and you're mentally unstable."

Now, after Aldrin sued two of his children and his business manager earlier this month, claiming they sought to take advantage of him, the family is embroiled in a rancorous dispute that has spilled from the courts into a public spectacle that both sides say they don't want.

Like many intergenerational feuds involving elderly parents, this one centers on the delicate questions of how best to care for the elderly, when others should step in and who should make those decisions.

His children say they love and cherish their father and are only trying to protect him. Aldrin believes they are trying to unjustly strip him of his autonomy. In a lawsuit filed in Brevard County, Florida, Aldrin alleged that his son and business manager took advantage of him "for their own self-dealing and enrichment." It says they assumed control of his "personal credit cards, bank accounts, trust money, space memorabilia, space artifacts, social media accounts and all elements of the Buzz Aldrin brand." The suit also accuses Jan Aldrin of a breach of fiduciary duty.

Aldrin is an author of several books, and the chairman of a foundation designed to inspire and educate people about the space travel, science and engineering. On the foundation's website, Andy and Jan Aldrin are listed as board members, as is Christina Korp, who is also listed as manager and "mission control director" at Buzz Aldrin Enterprises, a separate company.

"He doesn't want to fight with his children," Bauer, the attorney, said. "But he does want control of his life and his dreams. ... We need to stop thinking our grandparents and our elderly are spent resources that are just waiting to be thrown away. We need to see our aging population as the valuable resources they are."

That, Andy Aldrein said, is precisely how his children view him. In interviews, he, his sister Jan and Korp, Buzz Aldrin's business manager, all vehemently denied the allegations that they took advantage of the retired astronaut.

All financial transactions are run through a business management firm, and Andy Aldrin said he "couldn't spend any money without their knowledge and approval." He added that his father's space memorabilia is under control of a trust that Buzz Aldrin helped set up.

"Let it be clear that every one of these allegations are products of the increased confusion and memory loss that Dad has demonstrated in recent years," Andy and Jan Aldrin said in a statement.

They said their father had recently started associating with a few people they did not trust who were "trying to drive a wedge between Dad and the family," Andy Aldrin said. In the statement, the siblings said they would not allow "opportunistic agents who see an opportunity to grab the spotlight break our family apart."

They said they were also concerned about his increasingly lavish lifestyle, which grew to more than $70,000 a month at a time when he stopped accepting paid speaking engagements. His annual salary from the foundation was just $36,000.

"The most offensive and egregious aspect of this lawsuit is the accusation of elder exploitation," Andy Aldrin said. "We dearly love and respect our father and are trying to protect his ability to live well and continue to be financially self-sustaining. To accuse us of stealing from him to enrich ourselves is deeply offensive and easily refuted. We look forward to the opportunity to set the record straight."

This week, Aldrin was undergoing one of three mental health examinations requested by the court to determine his competency, his attorney said, and would not available for comment. But during an appearance on "Good Morning America" on Tuesday morning, Aldrin said that he was of sound mind and body.

"I'm feeling younger and more energetic, really, than really I have ever been in my life," he said. "There is less confusion and more clarity."

Andy and Jan Aldrin declined to discuss his mental health in detail, saying it was a confidential matter to be sorted out by court-appointed experts. But they said that given their father's celebrity status, and willingness to trust people, he could be susceptible to fraud.

"The main point is, we are trying to protect his assets from the people he's associating with that seem to think he maybe has a whole lot more money than he does," Jan Aldrin said. "He does attract these people. That's why we were protecting him. They seem to want to profit from him. We look into it, and a lot of them have a shady history, and they don't have my Dad's best interest at heart."

The legal wrangling comes on the eve of the 50th anniversary of the Apollo 11 lunar landing, and as Aldrin is seeking not just to secure his legacy, but to build on it, extolling the virtues of exploration and space travel. He travels extensively, speaking about his vision to get people to Mars. He also talks openly about his past bouts with alcoholism and depression.

"He's 88 years old, but he still has something to contribute to this country and the world," Bauer, the attorney, said. "He doesn't want to be a Faberge egg stuck up on the shelf."

In a statement, Jan and Andy Aldrin said the family is "committed to protecting him, his reputation and his legacy," and that they hope to resolve their differences.

"I honestly believe if we can get my dad in a safe place with the right people around him that have supported him for decades I think we can get back to creating a legacy that he deserves," Andy Aldrin said.

Buzz Aldrin seemed less conciliatory, telling the Wall Street Journal, "I intend to disengage as a repairman of family ruptures."

But days later he struck a different tone on "Good Morning America": "Family is forever, and I will forever be trying to patch it up."