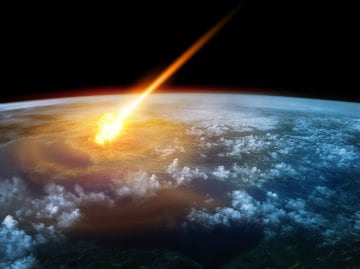 Representational Image of a meteorite.

Urumqi, China: One small cheque to a businessman, one giant leap for a meteorite: after journeys of millions of kilometres, rocks formed from the primordial soup of the solar system have landed on the walls of a Chinese showroom.

For some of China's wealthy, the terrestrial trappings of fast cars, designer bags and deluxe apartments are worthless compared to bounty from outer space.

Tong Xianping is among the Chinese entrepreneurs paying astronomic prices and making an impact in one of the world's more arcane markets.

He spent a million yuan ($163,000) on a chunk of the iron-packed Seymchan, pieces of which were first found in a Russian riverbed in 1967, and believed to be billions of years old.

"It was worth it," said Tong, 50, admiring the 176 kilogram mass, which calls to mind an inflated lump of coal. "They are news from space."

Tong keeps dozens of specimens under spotlights at his exhibition space in Urumqi, the capital of China's far-western Xinjiang region.

They include a knobbly brown rock that was part of Gibeon, a meteorite which crashed in prehistoric southern Africa. It also cost around a million yuan, Tong adds.

From a safe, he pulled out carbonaceous chondrites he scooped from the sands himself - ancient chunks resembling the nebula which produced the planets of the solar system.

"These are very complete fragments, and hard to find," he said.

Flashy purchases have made China's newly wealthy - often politically-connected businessmen - a subject of envy and ridicule.
"Company founders and bosses like big meteorites," said Tong, who made his money dealing in jade.

"If there are good meteorites, rare ones, I'm willing to spend a lot," said one of the pair, an executive surnamed Liu, whose firm has won construction contracts on Urumqi's first subway line.

Tong is happy to be called a nouveau riche, he says, although he dismissed earthly possessions: "Cars are manufactured, but there can only be one of each meteorite."

Scholars study the rocks for clues to the origins of the solar system, and some believe they seeded Earth with organic molecules that enabled life to form.

Tong's own passion for interplanetary matter is facilitated by a global market with roots in remote deserts and polar regions, where the bodies are most easily spotted.

Top specimens fetch hundreds of thousands of dollars at auction, but unlike palaeontologists and archaeologists who decry looting on their sites, experts in the field welcome the trade.

"We have a co-operative relationship with the collectors," said Monica Grady, a leading meteorite scientist at Britain's Open University. "We can't afford to go out and collect, but this small army of dealers will do it."

Finders depend on academics to accredit the specimens so that they have value on the market, while at the same time the scientists keep a chunk for themselves, she added.

But the wave of Chinese buyers has sent prices skyward and raised fears of forgeries among some veteran collectors.

"They are just interested in how much they are worth, they don't understand the science behind them," said Bryan Lee, a Chinese civil servant who scopes out specimens at the world's largest meteorite trade show, in the US desert city of Tuscon.

"It's led to an increase in fakes," he added.

"Chinese buyers like big specimens and their presence in the high end market has been noticeable," said Eric Twelker, columnist for the US-based Meteorite Times.

But he added: "Most submissions from China are mistaken or fraudulent. This has been going on for a number of years and I am wary of anything from China."

Tong, who stands almost two metres tall and has a fondness for imported '555' brand cigarettes, frequently ventures into China's vast Taklamakan desert in search of manna from heaven.

The world's second-largest expanse of shifting sands, the Taklamakan is known to insiders for the 1,000-kilogram Fukang meteorite discovered in 2000, which resembles a honeycomb in gold and silver when cut open - and is valued at millions of dollars. Tong owns a slice.

Aside from a brutal climate, Tong - who scoots around in a dune buggy - also has to contend with packs of wolves and hordes of aggressive insects.

"The ants came at us like a flood," he said of one incident. "They can eat a whole sausage in two minutes.

Promoted
Listen to the latest songs, only on JioSaavn.com
"I often come across snakes and poisonous spiders, but I love it.

"It's about doing what you want, and being far away from the world," he added. "The mysteries of the universe are endless, that's why we're interested in meteorites."