Stranger Offered To Help Teen Raped By Her Dad, Only If She Recorded It

Bryan Rogers is accused of driving across the country to pick up a 14-year-old girl who told him her father was raping her, but only after she gave him a video of the act. 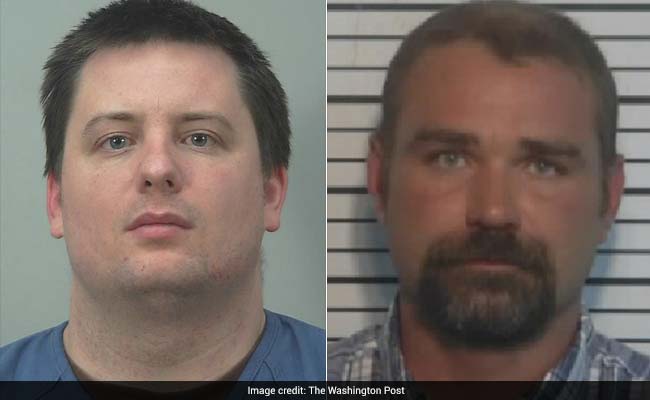 Brian Rogers (left) is accused of sexual exploitation and the teen's adoptive father (right) of rape.

Sometime after 11 p.m. on Jan. 13, a 14-year-old girl sneaked out of her home in the Tennessee mountains. She climbed into 31-year-old Bryan Rogers's car and they drove nearly 800 miles to his home in Wisconsin, according to police, avoiding toll roads and gas stations, anywhere with surveillance.

He was virtually a stranger, but she hoped he was a stranger willing to help. She had started chatting with him on Christmas Eve after meeting him on the online game Roblox. Before long, she had confided in a series of online messages that her adoptive father had been sexually molesting her.

She told him that she'd tried to tell her mother, who didn't believe her, according to a police affidavit. She told him she was so distraught she had been planning to kill herself. "I can't just stay here bryan I'm begging u plz," she wrote to him.

He would help her, he said, but on one condition: She would have to record her rape on video and send it to him.

It was the only way he could avoid going to prison, he said.

"I know you don't want to do it but I don't exactly want to see your dad rape you either," he told the 14-year-old, according to messages later obtained by the FBI. "But we need clear video evidence."

So she gave it to him. Now that video is the basis of a federal sexual exploitation case against Rogers and a rape charge against her adoptive father, Randall Pruitt. After more than two weeks of an intensive search, investigators on Jan. 31 discovered the girl hiding in a closet at Rogers's home in Madison, where he lived with his mother, according to an affidavit filed Monday in Wisconsin federal court.

He claimed he didn't alert police about the alleged sexual abuse or turn over the video to authorities, the affidavit says, because he thought it was blurry and would not hold up in court.

Attorneys for Rogers did not immediately respond to a request for comment.

The search for the 14-year-old girl began almost immediately after her mother discovered she was not in her bedroom on the morning of Jan. 14.

Soon, police detected her cellphone near a cell tower in Corbin, Kentucky, about 30 miles from the Tennessee border. But no one knew whether she was abducted or had fled. Her parents didn't know why she would be in Kentucky or heading north, as they had recently moved from Georgia, and nothing on her laptop or in other text messages indicated plans to flee. The calendar in her bedroom at the farmhouse where she lived with Pruitt, her mother and three siblings, about a mile up a mountain in Madisonville, indicated that she had plans for the weekend, reported WATE 6, the ABC affiliate in Knoxville, Tennessee. The home-schooled teenager, an animal lover, left a list of chores pinned to her wall, reminders to feed the horses and the pigs and ducks and dogs.

By Jan. 25, Pruitt and the girl's mother, Christina, appeared before a gaggle of reporters alongside the Monroe County sheriff and pleaded for her daughter, if she was listening, to "please come home."

"It's like having your soul ripped out of our body," said the bearded Pruitt, his black-and-blue plaid shirt tucked into blue jeans. "You can't think. You can't eat. You can't sleep. You can't rest. Life has just ceased for us since the day she left."

What Pruitt didn't know while pleading for the public's help, police now say, is that his daughter had secretly recorded him sexually assaulting her and shared the tape with Rogers. Police believe Pruitt is the same man seen on video coming into the girl's bedroom late at night and raping her.

In online messages starting Dec. 24 and later obtained by the FBI, the girl expressed discomfort about having to create the video, but Rogers assured her it was absolutely necessary - and nonnegotiable if she wanted help.

"Bryan do u understand how hard that would be though," the girl told him, according to the affidavit.

"yes ... But understand that I can get in a hell of a lot of trouble for harboring you," he responded. "Unless you can prove what he did they will just release you back to him if we get caught."

"I understand bryan I guess ... As far as needing the evidence goes and u getting in trouble," she said.

He gave her the instructions.

"Be in your room when he comes home and have the phone recording," he told her. "That way when he comes for you it's already recording and you don't have to worry about anything. And I can't help you if we don't have foolproof leverage against your dad. He's been molesting you for 12 years ... If that's not enough of a reason to get the video then idk what else to tell you."

She cursed at him, reminding him she was suicidal over this.

"IDFK ANYMORE!!" she responded. "But u can't just leave me here!"

Once investigators pinpointed Rogers, they arrived at his home on Jan. 31. He admitted he talked to the girl via Roblox, telling the agents that she confided in him about the sexual assault and had sent him a video, but claimed that he had never traveled to Tennessee and that the girl was not with him, according to the affidavit.

Agents came back four hours later. This time, his mom answered the door.

They told her they needed to search the house - and that's when they found the 14-year-old hiding in a basement closet.

Once arrested, Rogers admitted he asked her to email the video of the "full blown rape" and that once he had it, he drove to Tennessee to pick her up and bring her back, the affidavit says. Rogers admitted he tried to avoid any surveillance on toll roads and smashed her phone so it could not be traced.

The officers found the seven-minute video on his computer.

Currently detained in Dane County Jail, Rogers is set to appear in federal court Thursday for a detention hearing in the Western District of Wisconsin. He faces a mandatory minimum sentence of 15 years in prison and a maximum of 30 years on the single charge of sexual exploitation of a minor for the purpose of producing a visual depiction, according to the Justice Department.

Randall Pruitt appeared Wednesday in state court wearing a bulletproof vest over his striped inmate jumpsuit. His bond was set at $2 million on the rape charge, reported WTVC, the ABC/Fox affiliate in Chattanooga.

WATE 6 reported that the girl is back in Monroe County but the whereabouts of her and her siblings is confidential. The news station spoke to her mother, Christina, who said she was focused on "bringing her daughter home" and that the allegations against Pruitt were new to her.