Susie Goodall "was rescued at 1500 GMT and is already on the ship heading to Punta Arenas," in southern Chile, Maritime Rescue Services said. 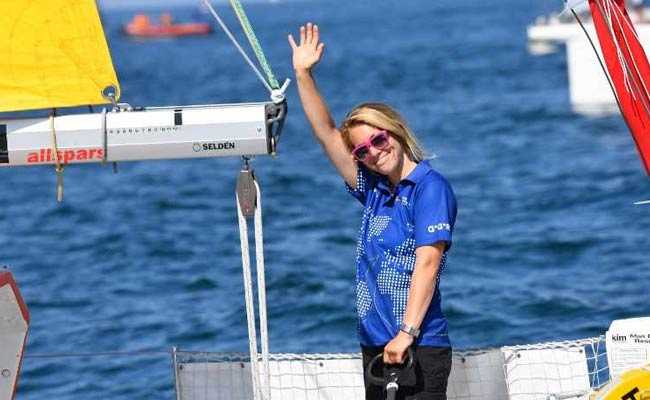 British Golden Globe Race sailor Susie Goodall was plucked from a stormy Southern Ocean by a Chinese ship on Friday, a day after her yacht was dismasted, rescuers told AFP.

Goodall "was rescued at 1500 GMT and is already on the ship heading to Punta Arenas," in southern Chile, the country's Maritime Rescue Services said.

A photo tweeted by rescuers showed Goodall, her head wrapped in a bandana, being winched above the waves and aboard the Hong Kong-flagged vessel Tian Fu.

"Susie is on the ship!!!! Wowowow! Message just received from Susie Goodall," the Golden Globe Race organizers announced on their website.

"This is fantastic news indeed... well done Susie too," they said.

The youngest competitor in the race and the only woman, 29-year-old Goodall was briefly knocked unconscious when mountainous seas upended her yacht DHL Starlight early Thursday, tearing off its mast and trashing much of her equipment.

Goodall had managed to get her engine running but it failed after just 20 minutes, complicating rescue efforts as Chilean authorities diverted the Tian Fu to the area.

As the nearest vessel to Goodall's stricken 36-foot (11-meter) Rustler-model yacht, it was called on by the maritime authorities to assist the solo sailor once the gravity of her situation became clear.

The race organizers said Goodall had managed to use a sea anchor to slow her yacht -- which was being driven by heavy seas -- to make a rescue attempt less dangerous.

"She's a real fighter," said a Golden Globe Race spokesman on Facebook before Goodall was winched off her boat.

Goodall was attempting to navigate the southern Pacific's notorious Roaring Forties when she lost her mast.

The young Briton sent a series of frantic text messages to race organizers throughout her ordeal. A photo showed Susie Goodall, her head wrapped in a bandana, being winched above the waves and aboard the Hong Kong-flagged vessel Tian Fu

"Taking a hammering! Wondering what on Earth I'm doing out here," she texted as the storm hit.

When concerned organizers finally managed to contact her by satellite phone several hours later -- after she had activated a distress beacon -- she confirmed her boat had been dismasted but said the hull had not been breached.

"The boat is destroyed. I can't make up a jury rig. The only thing left is the hull and deck which remain intact," she said.

"We were pitchpoled (rolled end over end) and I was thrown across the cabin and knocked out for a while."

Goodall's yacht was surging through one of the planet's most remote stretches of ocean when disaster struck, some 1,900 nautical miles southwest of Raper Lighthouse, in Aysen, on the Chilean coast.

While "beaten up and badly bruised," she was safe and had managed to bring flooding under control and get her engine going, giving her some maneuverability when the rescue ship arrived, race organizers said.

In text updates, Goodall said she endured "a looong night."

"In need of a good cuppa tea! But sadly no cooker," she messaged.

The Golden Globe Race involves a grueling 30,000-mile (48,000-kilometer) solo circumnavigation of the globe in yachts similar to those used in the first race 50 years ago, with no modern technology allowed except the communications equipment.

The fleet set off in July from Les Sables-d'Olonne on the west coast of France.

The first boats are expected back in April next year.