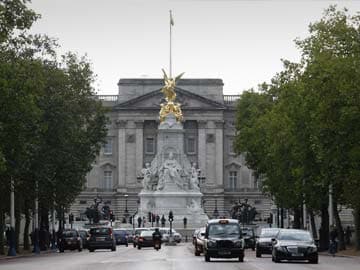 The Royal Standard is seen flying over Buckingham Palace in central London on October 14, 2013. (File photo)

London: Queen Elizabeth II's household finances are at a "historic low" with just 1 million pounds left in reserve, even as the royal palaces were "crumbling" and in urgent need of repair.

A report by the Commons public accounts committee found that the Queen's advisers were failing to control her finances and her courtiers have been advised to take money-saving tips from the treasury, The Telegraph reported.

MPs said her advisers had overspent to such an extent that her reserve fund had fallen from 35 million pounds in 2001 to just 1 million pounds today.

The Royal household had made efficiency savings of just 5 per cent over the past five years compared with government departments, that are cutting their budgets by up to a third.

MPs on the committee said the treasury must "get a grip" and help to protect the royal palaces from "further damage and deterioration".

Margaret Hodge, the Labour chairman of the committee, was quoted by the daily as saying: "We believe that the treasury has a duty to be actively involved in reviewing the household's financial planning and management - and it has failed to do so."

Buckingham Palace and Windsor Castle are reported to be in urgent need of repair.

Staff catch rain in buckets to protect art and antiquities, while the Queen's old boilers were contributing to bills of 774,000 pounds a year, the report said.

"The household must get a much firmer grip on how it plans to address its maintenance backlog. It has not even costed the repair works needed to bring the estate back to an acceptable condition. Again, the treasury has an oversight role here," Hodge said.

In April 2012 the Sovereign Grant replaced the old way of funding the Royal family through the Civil List and various government grants.

The Sovereign Grant represents 15 per cent of the net surplus income of the Crown Estate, land holdings that generate money for the treasury.

A Buckingham Palace spokesman said the sovereign grant had made the Queen's funding "more transparent and scrutinised" and was resulting in a "more efficient use of public funds".

He said repairing the palaces was a "significant financial priority" and that the Royal household had almost doubled its income to 11.6 million pounds since 2007. The Queen receives 31 million pounds a year from taxpayers.

In the report, the PAC suggests that the Royals need to both cut their costs and increase their income. It points out that last year the Royal Household's gas consumption rose by 14 per cent and the waste it generated by 9 per cent.

Promoted
Listen to the latest songs, only on JioSaavn.com
It pointedly asks why Buckingham Palace cannot be open to the public for longer, potentially increasing revenues.