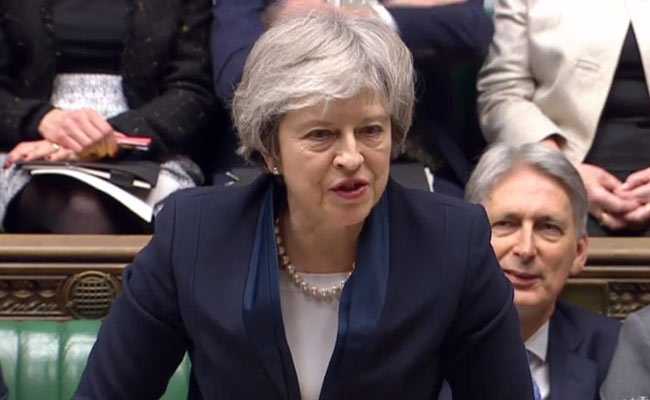 Leaders said they would be happy to keep talking with May, but there were no radical changes on offer.

Prime Minister Theresa May stood almost alone on Tuesday, as many in her own party prepared to abandon their leader and reject her unloved Brexit deal - leaving Britain's future relationship with the Europe unclear.

With Tory vote-counters predicting the possibility of humiliating defeat in a momentous vote at the House of Commons on Tuesday night, historians were searching the past for comparisons.

Some scholars had to return to the nineteenth century to find a comparable party split and parliamentary defeat - to Prime Minister William Gladstone's support for Irish home rule in 1886, which split the Liberal Party.

"The events in Parliament today are really quite remarkable," said Cambridge University political historian Luke Blaxill. "This doesn't happen." Meaning, usually British parties fight with each other in Parliament - they don't tear their own parties in half.

Outside of Parliament on Tuesday, hundreds of protestors gathered to shout slogans - more than two years after the 2016 June referendum that saw Brexit win 52 to 48 percent in the largest balloting in British history.

Brexiteers banged drums and rang a "liberty" bell, while pro-Europeans handed out "bollocks to Brexit" stickers.

Jeff Wyatt, 54, a pro-Brexit voter was holding aloft a placard that accused May of treason.

"For the first time in the history of my country, we've got Parliament against the people," Wyatt said, gesturing at the Palace of Westminster.

Over the past weeks, with growing fervor, May has warned Conservative Party members of Parliament that they gambled all if they voted down her half-in, half-out compromise plan.

The British leader argued that rejection of her plan could bring about a fraught "no-deal" Brexit, loaded with financial risk.

Or worse, she warned, opponents of Brexit could succeed in their drive to call for a second referendum on whether to remain or leave in the continental trading bloc.

The prime minister suggested that Brexit supporters might even lose that second vote and be saddled with a bitterly divided nation and the status quo.

"If we don't vote for this agreement then we risk playing into the hands of those who do not want Brexit to go ahead," Environment Secretary Michael Gove told BBC Radio on Tuesday.

But there has been mounting frustration and anger over how May has handled the long, slow negotiations with Brussels.

The Liberal Democrat party member, Layla Moran, spoke for many when she told the BBC, "Brexit is a complete cluster shambles."

British political reporters estimated that as many as 100 Conservative Party members of Parliament might vote against May's deal, joining the opposition Labour party and others, including Northern Ireland's Democratic Unionist Party, which helps prop up May's minority government - but hates her Brexit deal.

The Financial Times columnist Robert Shrimsley wrote that it appeared May was hurtling toward "the most shattering rejection of any prime minister in modern times."

He wondered, "Will it be 200 or only 100? Might Theresa May surprise us all and lose by a mere 50 or 60 votes? It is a measure of the looking glass world of British politics that a crushing reverse on the most important piece of legislation the prime minister will ever introduce is discussed as a bump in the road rather than as the administration-ending loss it should be."

She almost pleaded with her fellow Tories on Monday to take "a second look" at her plan. "It is not perfect," she said, "But when the history books are written, people will look at the decision of this House and ask, 'Did we deliver on the country's vote to leave the EU, did we safeguard our economy, security or union, or did we let the British people down?'"

If May's deal is rejected by Parliament, she has until Monday to return to the chamber with her "Plan B."

May's office has been tight-lipped about what that might be. Her supporters say she will not resign, even in the face of a crushing defeat. They suggest instead that May might return to Brussels, to seek new concessions over the controversial provisions over the Irish border - or even attempt to reopen negotiations.

At the same time, the opposition Labour Party leader Jeremy Corbyn is under pressure to call for a "no confidence" vote against May. It is likely he would lose that vote - as Tories will not want to see May chucked and a general election called.

While this plays out, proponents pushing for a second referendum to break the logjam will continue their efforts.

In Brussels, heads were shaking in wonderment at the political chaos enveloping Westminster, and concern continued to grow about the seeming deadlock.

EU diplomats who work on Brexit negotiations warned that they had nothing up their sleeve that could fundamentally shift the debate in Britain if the vote fails. And they said that May has yet to present them with a plan that she can guarantee would pass muster in her own parliament, leaving them puzzled about what precisely Britain wants more than two years into the process and whether they could offer anything to ease the deal over the finish line.

Although EU policymakers have said there would probably be some flexibility about the March 29 deadline, any extension would have to be approved by leaders of all 27 remaining nations, and there is little appetite to do so if it seems that doing so would do little to resolve the debate in Britain. Many capitals are bracing for a chaotic British exit from the European Union and shifting their energies toward preparations to limit the damage.

Leaders said Tuesday they would be happy to keep talking with May, but they said there were no radical changes on offer.

"I do not think that there are any new solutions being put on the table that have nothing to do with what has already been negotiated and agreed," German Foreign Minister Heiko Maas in told reporters at a session of the European Parliament in Strasbourg.

(Except for the headline, this story has not been edited by NDTV staff and is published from a syndicated feed.)
Comments
Theresa MayBrexit Vote