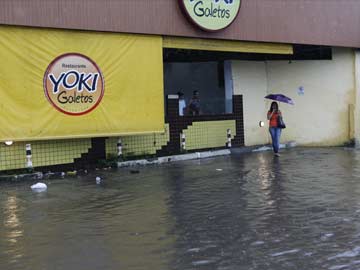 A woman waits on the sidewalk on a flooded street after heavy rain storms in Recife, Brazil, Thursday, June 26, 2014.

Brasilia, Brazil: Nearly a week of torrential rain has triggered widespread floods in southern Brazil that have forced 6,000 people from their homes, officials said on Saturday.

Most of those evacuated were in Rio Grande do Sul, according to the state's emergency agency, which said that in just five days there was more than twice the average rainfall for the entire month of June, while the Uruguay River was 18 meters (59 feet) above normal.

An emergency has been declared in three towns in the state.

In neighboring Santa Catarina state, the floods ruptured a dam and 200 families were evacuated from the surrounding area as a precaution.

More than 1,400 people were forced from their homes in all in the state.

The state of Parana was also hit by heavy rains this month, causing floods that killed 11 people and affected more than 700,000.

Promoted
Listen to the latest songs, only on JioSaavn.com
The flooding comes as the World Cup knock-out round gets under way in Brazil, though neither of Saturday's matches -- Brazil-Chile in Belo Horizonte and Uruguay-Colombia in Rio de Janeiro -- is in the affected states.

Porto Alegre, the capital of Rio Grande do Sul, hosts Germany-Algeria on Monday, but has not been hit by the recent floods.