After robbing two banks, gangsters made their escape by strapping hostages to the roofs and hoods of moving cars, according to shocking images broadcast by local news channels. 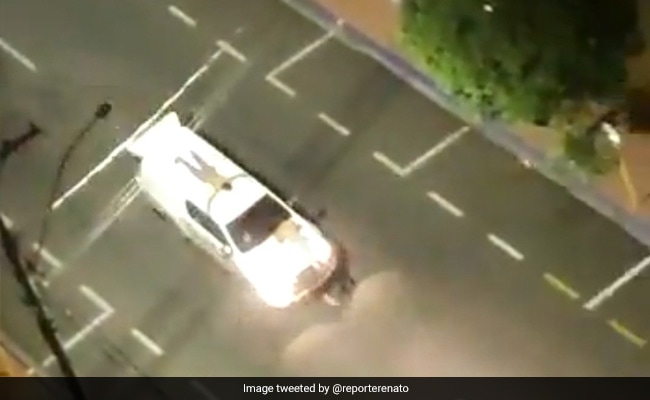 Using explosives, drones and heavy weapons, the assailants took over downtown streets in the southeastern city of Aracatuba, home to some 200,000 people.

After robbing two banks, they made their escape by strapping hostages to the roofs and hoods of moving cars, according to shocking images broadcast by local news channels.

Two civilians and one of the bank robbers were killed during the assault, which left at least six injured, according to police.

The assailants placed explosives in different parts of the city and surrounded some police stations to delay the arrival of reinforcements.

They wore "bulletproof vests, rifles and helmets," and looked like soldiers, a witness who asked not to be identified told Globo TV.

"The scenes of terror experienced by the population of Aracatuba will not go unpunished," vowed Sao Paulo governor Joao Doria, who ordered a task force of 380 police officers to hunt the gang down.

"Two criminals were captured and a third died when confronting the police," he said.

Brazil has seen other such robberies in recent years, marked by a high degree of planning and heavy weapons, and carried out in medium-sized cities to ensure an escape route and a significant cash haul from the banks.

In December of last year, two similar mega-assaults were carried out barely a day apart in cities in the states of Para, in the north, and Santa Catarina in the south.

A few months before, the Sao Paulo towns of Botucatu and Ourinhos suffered similar brazen attacks.

According to the Sao Paulo Security Department, both cases were resolved and "a good part of these gangs are in jail."