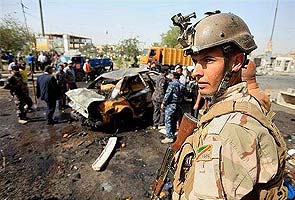 The bombings were the latest in a wave of attacks since April that has intensified fears Iraq is sliding into the kind of sectarian conflict that killed thousands in 2006-2007.

Two car bombs and a roadside bomb exploded near busy markets in southwestern and western Baghdad on Wednesday evening, killing at least 25 people and wounding another 72, police and medical officials said.

Promoted
Listen to the latest songs, only on JioSaavn.com
Two roadside bombs also went off outside a sports stadium in the city of Baquba, about 50 km (30 miles) northeast of Baghdad, killing two soccer players and wounding another nine people, police and local officials said.