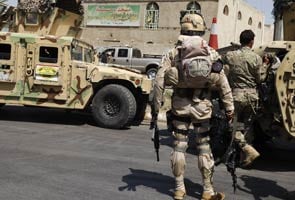 Baghdad: Bombings in central Iraq that targeted a market, a cafe and the homes of police officers killed 13 people on Friday, officials said, the latest attacks in a wave of violence roiling the country.

Police said the deadliest attack took place in Friday morning when a bomb went off inside a crowded outdoor market in the town of Youssifiyah, just south of Baghdad. The attack killed five shoppers and wounded 15 people, officials said.

Earlier in the day, bombs exploded near several houses belonging to police officers in the central city of Baqouba, killing four people, including a woman, authorities said. The explosives appeared to have been planted just outside the homes. Ten people were wounded in that attack, officials said.

Baqouba is a former al-Qaida stronghold some 60 kilometers (35 miles) northeast of Baghdad.

Promoted
Listen to the latest songs, only on JioSaavn.com
Hospital officials confirmed the casualty figures for the attacks. All officials spoke on condition of anonymity because they were not authorized to speak to journalists.

Violence has spiked in Iraq since April, when the pace of killing reached levels unseen since 2008. At least 480 people have been killed in attacks across the country so far this month, according to Associated Press count.